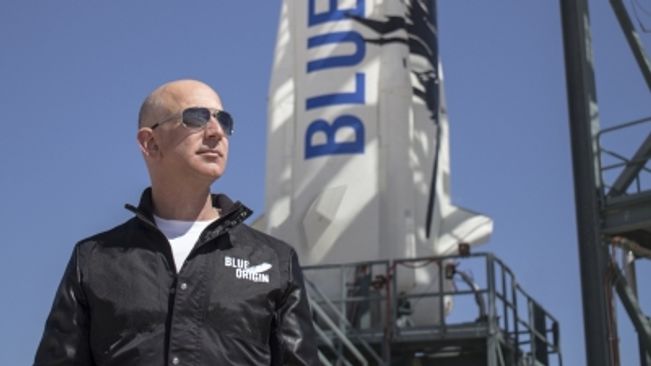 San Francisco, July 27: Fresh from his trip to the edge of space, Amazon Founder Jeff Bezos has offered NASA a discount of up to $2 billion to give his space company Blue Origin the human lunar landing system (HLS) contract, won by Elon Musks SpaceX earlier this year.

Escalating his space war with Musk, Bezos in an open letter to the NASA Administrator Bill Nelson said on Monday that his company would close US space agency's near-term budgetary shortfall and producing a safe and sustainable lander that will return Americans to the surface of the Moon ï¿½ this time to stay.

"I believe this mission is important. I am honoured to offer these contributions and am grateful to be in a financial position to be able to do so," Bezos wrote.

Amid protests from Bezos-owned Blue Origin, the US space agency in May suspended work on the $2.9 billion lunar lander contract given to Elon Musk-owned SpaceX.

Blue Origin had filed a protest with the US Government Accountability Office (GAO) against NASA for awarding $2.9 billion contract to SpaceX for landing astronauts on the Moon by 2024.

In the letter, Bezos said that "Blue Origin will bridge the HLS budgetary funding shortfall by waiving all payments in the current and next two government fiscal years up to $2B to get the programme back on track right now".

"This offer is not a deferral but is an outright and permanent waiver of those payments. This offer provides time for government appropriation actions to catch up. Blue Origin will, at its own cost, contribute the development and launch of a pathfinder mission to low-Earth orbit of the lunar descent element to further retire development and schedule risks," Bezos added.

The US space agency was expected to pick two lunar lander prototypes (including one of Blue Origin's) but funding cut from US Congress led the agency to select SpaceX over Blue Origin.

The third company in the race, Dynetics, also protested NASA's decision to the GAO, which adjudicates bidding disputes.

In a 175-page protest, Blue Origin had accused NASA of misjudging several parts of its proposal for its lunar lander called Blue Moon.

Musk responded to Blue Origin's protest with a tweet: "Can't get it up (to orbit) lol".

The contract is part of NASA's Artemis programme, which aims to return astronauts to the moon by 2024 as a stepping stone to the first human mission to Mars.
(IANS)