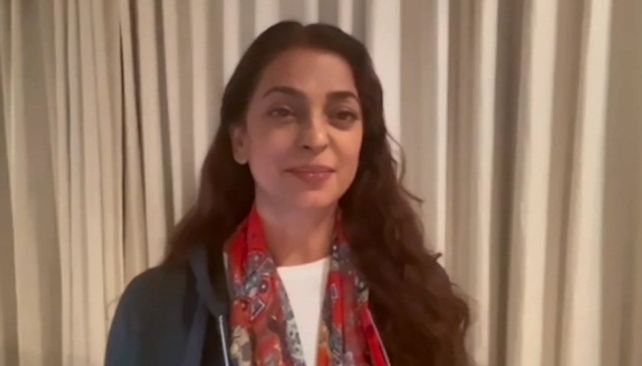 Mumbai, June 2: Actress Juhi Chawla, who has filed a lawsuit in Delhi High Court on the health risks associated with 5G telecom technology, has urged netizens to do a bit of research on the ill effects of radiation.

Juhi took to instagram early on Wednesday to talk about how radiation will increase exponentially with 5G and urged people who are interested, to join her in the first virtual hearing being conducted at the Delhi High Court, on June 2.

Speaking in an Instagram video in Hindi and English early on Wednesday, Juhi said: "People are asking me why I woke up suddenly and filed a suit. I want to tell them that I didn't wake up today. I have been speaking about radiation, safe cell phone use, cell phone tower radiation since the last 10 years and tried to spread awareness on the same as much as possible."

"Our phones work on radio waves, which are increasing in our environment. From 1G to 2G to 3G to 4G. Now 4G to 5G is a very big leap. Radiation will increase exponentially. See, you know it, everything in moderation is fine but when it is more than required then you get to know the ill effects of it," she added.

Citing an example, the actress further said: "I will give you a simple example. A pharmaceutical drug when introduced in the market, research is done for at least 10 to 15 years to check its side effects and then it finally gets the approval to be released in the market. But this radiation is being spread over the last 20 to 25 years, has anyone studied about this?"

Urging netizens to read and research about radiation, she added: "All of us use technology, so I request you to research about this and see what you get to know about it. I hope that you are convinced and join me. The case has just begun and our first hearing is on 2nd June. I will share the link if you want to join me."

The actress also shared a note for memers who have created memes on her and her case. Addressing them in her video, Juhi said: "I want to thank those who have made memes on me. Because of these memes a lot of people got to know about this. So, keep it coming, let's enjoy the ride."

Alongside her video, Juhi wrote on Instagram: "Hum, tum aur 5G. If you do think this concerns you in any way, please feel free to join our first virtual hearing being conducted at the Delhi High Court, on the 2nd of June, 3:00 PM IST onwards! Link in bio. #5g."