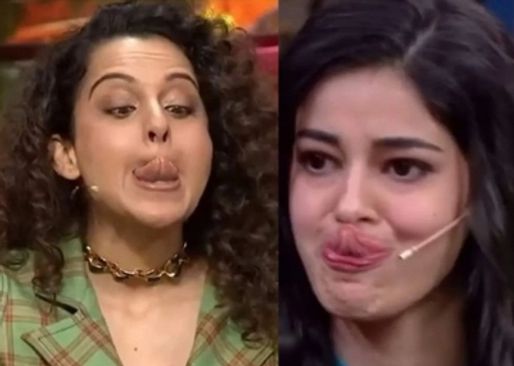 Actress Kangana Ranaut, who does not shy away from speaking her mind, has poked fun at actress Ananya Panday during an episode 'The Kapil Sharma Show'.

Mumbai, May 17: Actress Kangana Ranaut, who does not shy away from speaking her mind, has poked fun at actress Ananya Panday during an episode 'The Kapil Sharma Show'.

Kangana, who was promoting her forthcoming film 'Dhaakad' in the comedy show, was seen giving out honest confessions about Bollywood, including taking a jibe at many stars. She was accompanied by her co-stars Arjun Rampal, Divya Dutta and Sharib Hashmi, and director Razneesh Ghai.

In her reply, Kangana, touched her nose with her tongue, recreating a moment when Ananya did the same when she was asked about her talent in the same show last year.

Kangana went on to say: "Bolly-bimbo woh hote haina jo kehte hain, I can touch my tongue to my nose."