Pankaj Tripathi: Acting for me is not only a means to earn fame, money 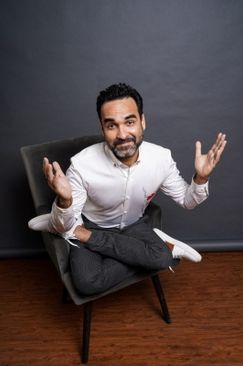 Mumbai, Sep 14: Actor Pankaj Tripath says that acting is a means to renew himself which enables him to create characters with utmost authenticity.

Pankaj made his debut with a minor role in the film 'Run' in 2004 but it was Anurag Kashyap's 'Gangs of Wasseypur' that put the spotlight on him.

Over the years, his characters have remained etched in the minds such as the doting and progressive father in 'Gunjan Saxena' and 'Bareilly Ki Barfi', the real estate tycoon in 'Gurgaon', the menacing Kaleen Bhaiya in 'Mirzapur', 'Stree' or a CRPF officer in 'Newton'.

He says: "Acting for me is not only a medium to earn fame and money but through acting, I explore my inner being and reinvent myself."

Pankaj added that acting tends to revitalise his energy and senses of touch.

He said: "Acting tends to revitalize my energy and senses of touch, feel, and taste, which ultimately enables me to perform my art with sincerity and honesty."
(IANS)