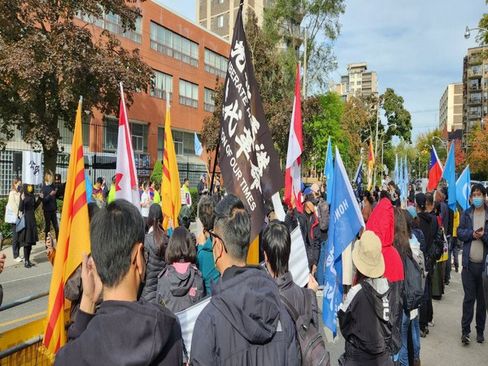 Tokyo, Oct 2: As China prepares to hold the 20th National Congress of the Communist Party of China (CCP) which is widely expected to approve a third term for President Xi Jinping, anti-China protests were held all across the World to mark the National Day of China on October 1.

In Tokyo, hundreds of Japanese citizens came out on the streets to express solidarity with the oppressed people of Tibet, Xinjiang, Mongolia, Hong Kong and Taiwan. Early morning joggers around the Chinese Embassy in Tokyo city were greeted by slogans criticising China for its brutal crackdowns in all minority regions. This was the protest against the continuing denial of basic human rights that they promised even in the Chinese constitution.

Posters also spoke of the damage China has caused to Japan in the past fifty years, despite Japanese companies having helped establish China's modern industrial foundations.

Later in the day, activists from across Japan, as well as representatives of the minority ethnic communities from China walked to the centre of Tokyo carrying banners, flags and posters denouncing China.

They urged the rest of the world to wake up to the harm China is causing.

The demonstration was held around the twin themes of - 'nothing to celebrate' and 'day of shame', both sentiments that echo strongly not just in Japan, but increasingly across the world.

Just a couple of weeks ahead of the 20th National Congress of the CCP, such a gathering showed unequivocally that despite businesses continuing to rely on China, the people of Japan wanted to send out a strong message to China and the CCP: respect the people and their rights. Without these, your power has no legitimacy, and your leadership will have no legacy worth the name.

A small protest was also organised in front of the Chinese Embassy in Vienna, Austria. Protesters were carrying anti-CCP posters and the Tibetan flag.

Tibetan Diaspora along with President Nawang Lobsang Taglung of Tibetan organisation in Vienna held a symbolic protest. Nawang said, "the fight for Freedom of Tibet will continue in future".

At a large demonstration near the Chinese embassy, more than 100 persons from organisations like Students for Free Tibet (SFT), Committee for Liberation of Hong Kong, Association of Uyghurs in France, as well as Mongolian, Taiwanese and Vietnamese groups joined this protest.

Marking the day as the Global Day of Action, the protesters, carried placards with slogans against China and demanded China end the Uyghur genocide and other violations against the people of Tibet, Hong Kong and Taiwan.

They also called on the global community to unite to prevent China from committing these crimes against humanity.

Protests were witnessed in major States across the United States including New York and California as also in Canada.

In Istanbul city of Turkey, the Uyghur community marked the 73rd National Day of China as the beginning of an era of occupation, persecution, starvation and inhuman crimes against the peoples of East Turkestan.

Uyghur NGOs protested near the Chinese Consulate in Sariyer district of Istanbul against the Chinese policies of assimilation and genocide.

The protest started with the recitation of the verses of holy Quran and the national song of East Turkestan. Protestors raised slogans against Chinese policies and Chinese President Xi Jinping including 'China Stop Genocide', 'Release our relatives', 'Where are our relatives' and 'Stop Starvation'.

Protestors also displayed photographs of their family members missing in Chinese internment camps whom they have not been able to contact for many years.

A motorbike rally of around fifty Uyghur activists carrying flags of Turkiye and East Turkestan passed near the protest site. A signature campaign on a large banner appealing for the support of the United Nations was also showcased.

According to Amnesty International, the human rights situation across China continued to deteriorate. Human rights lawyers and activists reported harassment and intimidation; unfair trials; arbitrary, incommunicado and lengthy detention; and torture and other ill-treatment for simply exercising their right to freedom of expression and other human rights.

In its 2021 report, Amnesty International stated that the CCP government continued a campaign of political indoctrination, arbitrary mass detention, torture and forced cultural assimilation against Muslims living in Xinjiang.

The Amnesty report compiled data collected between October 2019 and May 2021. It relied on interviews with 128 people, including 55 former internment camp prisoners, and 68 family members of people either missing or presumed detained.