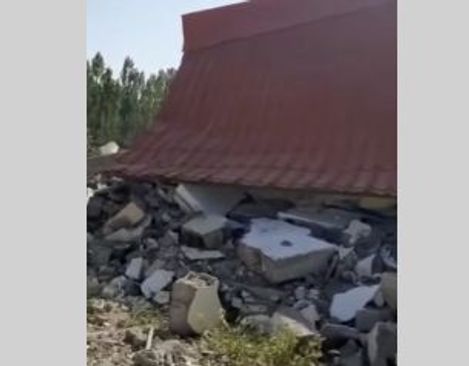 London, Dec 5: Iran has destroyed the villa owned by a family member of an Iranian rock climber who competed in an overseas competition without her headscarf, a video appears to show, the media reported.

In the undated video, the brother of Iranian rock climber Elnaz Rekabi, himself an athlete, is seen sobbing by the ruins of a home with medals on the ground, the Daily Mail reported.

Rekabi, 33, and her brother Davoud were both reportedly arrested after Rekabi's return to Iran following the tournament in South Korea in October in which she competed without a headscarf.

Many took the move as a sign of solidarity for nationwide protests in her homeland sparked by the death of 22-year-old Mahsa Amini in police custody, Daily Mail reported.

According to local media, the villa was not demolished as an act of retaliation against Rekabi's appearance in South Korea.

The Tasnim news agency said the house was razed by authorities before Rekabi took part in the competition, adding Rekabi did not hold the correct permit for its construction.

Rekabi posted a suspicious apology video on her Instagram Stories saying the hijab dropped by mistake and she was returning home.

After arriving at the Imam Khomeini International Airport outside of Tehran, she repeated the explanation that described her not wearing a hijab as 'unintentional'.

The Iranian government routinely pressures activists at home and abroad, often airing what rights groups describe as coerced confessions on state television - the same cameras she addressed on her arrival back home, Daily Mail reported.

Video online showed large crowds gathered to greet her at the airport, with fans offering cheers.

She walked into one of the airport's terminals, filmed by state media and wearing a black baseball cap and a black hoodie covering her hair. (IANS)