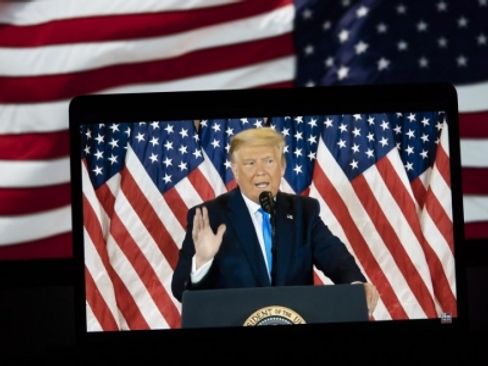 Washington, Dec 28: After much delay, US President Donald Trump has finally signed a massive $2.3 trillion government funding and coronavirus relief package, the White House announced, averting a shutdown of the federal government and delivering a much-needed economic aid amid worsening pandemic situation in the world's hardest hit country.

According to the White House, the President signed the package late Sunday from his Mar-a-Lago estate in Palm Beach, Florida, days after he asked lawmakers to boost stimulus checks to $2,000 for individuals or $4,000 for couples, while expressing displeasure over the bill's $600 direct payment for individuals as "ridiculously low".

"I will sign the Omnibus and Covid package with a strong message that makes clear to Congress that wasteful items need to be removed," The Hill news website quoted Trump as saying in a statement upon signing the legislation.

"I will send back to Congress a redlined version, item by item, accompanied by the formal rescission request to Congress insisting that those funds be removed from the bill," the President added.

The relief legislation includes direct payments of $600 per adult and per child.

The amount per adult is half the $1,200 payments that were provided under the CARES Act enacted in March, but the amount per child is slightly larger than the $500 allowed under that law.

Two expiring CARES Act programs, Pandemic Unemployment Assistance, which made benefits available to the self-employed and gig economy workers, and Pandemic Emergency Unemployment Compensation, which provided additional weeks of benefits, have been extended for 11 weeks, averting a fiscal crisis for millions of Americans.

The bill also includes $284 billion in funding for the Paycheck Protection Program, which provided distressed small businesses with forgivable loans.

On Monday, the Democrat-led House of Representatives will vote on the legislation that would change the $600 in the coronavirus relief-government funding package to $2,000.

But passing $2,000 checks in the Republican-majority Senate would likely face steep political headwinds, with a several party senators opposed to more money for stimulus checks.

"The President must immediately call on Congressional Republicans to end their obstruction... Every Republican vote against this bill is a vote to deny the financial hardship that families face and to deny the American people the relief they need," House Speaker Nancy Pelosi said in a statement on Sunday.

Sunday's development comes in the wake of an unabated resurgence of fresh coronavirus cases, deaths and hospitalisations across the US.

The US, currently the hardest-hit country in the world by the Covid-19 pandemic, has reached yet another grim milestone as its overall caseload has surpassed the 19 million mark, according to the Johns Hopkins University.

In its latest update on Monday morning, the University's Center for Systems Science and Engineering (CSSE) revealed that the country's infection tally and the death toll currently stood at 19,129,368 and 333,110, respectively.

With the world's highest cases and deaths, the US now makes up more than 23 per cent of the global caseload.

Currently, there are more than 117,300 people hospitalized with Covid-19.
(IANS)