'US pull out from Afghanistan may push some militants into Kashmir' 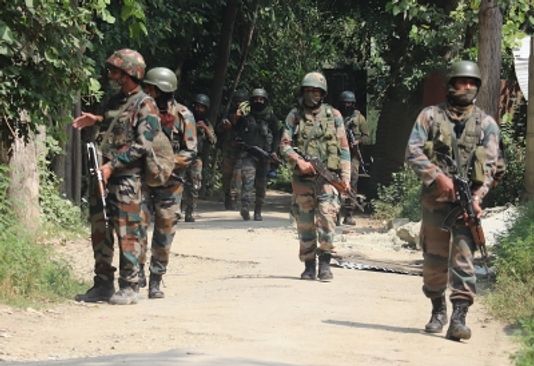 The Army has said that the US pull out from Afghanistan may push some militants into Kashmir, but the security forces are ready to tackle any situation.

Srinagar, June 26: The Army has said that the US pull out from Afghanistan may push some militants into Kashmir, but the security forces are ready to tackle any situation.

Lt. General Davendra Pratap Pandey, the GoC of Srinagar-based 15 Corps, made the remarks while speaking to reporters on Friday on the sidelines of a passing out parade at the JAKLI regimental centre here.

"Some people who are fond of so-called Azadi must ponder over what is the situation across the LoC and in Pakistan-Afghanistan border. Whatever happened 30 year ago caused huge distress to the people of Kashmir. Yes, there is a possibility that US forces pull out from Afghanistan may push some militants into Kashmir, but the situation is not what it was 30 years ago," he said.

"We are ready and fully geared up to foil all bids and to face every challenge whether on LoC or the hinterland."

He said that for the Army the first priority is always conventional training, then counter-insurgency operations or counter-infiltration operations.

"Wherever police needs us for any kind of operation we are joining them. Ceasefire or no ceasefire, our eyes are set on our enemy. We are ready to face any misadventure be that on the LoC or in the hinterland. We are ready to respond at every level effectively."

Talking about the induction of latest weaponry, the GoC said it was a normal process which is part of the annual turnover.

He, however, added that "given the Chinese situation on the LAC, a balance of forces is being maintained".

He said earlier under narco-modules, only money would come, but now drugs are also coming.

"The Jammu and Kashmir Police is dealing with narco-infiltration very effectively and a lot of drugs have been seized. It is high time for parents, civil society, and teachers to keep focus on children so that they stay away from drug," he said.

Asked whether the recent dialogue between Jammu and Kashmir politicians and New Delhi would have any impact on Kashmir's security situation, he said security situation and political process are two different things.

"Dialogue is an ongoing process which is always on. Security situation is a different matter that is being tackled at different levels," he said.

The GoC said unless the militant network goes, there is a need for the security grid so that people live in a peaceful atmosphere.

He said so far there is zero infiltration this year, but the launch pads across the LoC are still active.
(IANS)