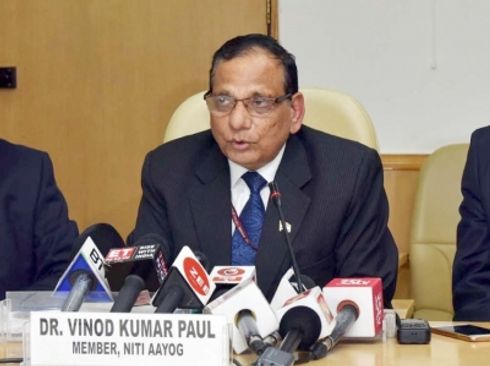 New Delhi, July 13: Noting that the world has been witnessing the third wave of the Covid-19 pandemic, NITI Aayog member V.K. Paul on Tuesday appealed to Indians to join hands to avoid its spread in India, warning that a "majority of cases will be reported if the next wave comes".

Citing data which mentions 3,90,000 Covid cases in the third wave across the world so far, Paul said it can only be prevented if people follow appropriate protocols in a coordinated way.

To avoid the third wave in India, Paul, while addressing a press briefing here, also asked the countrymen to follow Prime Minister Narendra Modi's advice given during his meeting with Chief Ministers of northeastern states where majority of tourists are being seen violating Covid-19 norms.

"The world is witnessing a third wave (of Covid-19). We have to join hands to ensure that the third wave doesn't hit India. The Prime Minister today clearly said that we should focus on keeping the third wave at bay, instead of discussing when it would come in India," Paul said.

He said the Prime Minister clearly mentioned that third wave or next wave will not come itself, it depends on us as to how we prevent it in spreading again in the country.

Carefulness, not lowering the guard and Covid-appropriate behaviour was emphasised by the Prime Minister when he held a meeting with Chief Ministers of northeastern states earlier in the day, said Paul, suggesting that Indians follow these key points to avoid the third wave of the deadly virus.

Paul also emphasised on six-feet distance, wearing masks and vaccination as three major Covid protocols to avoid the spread of the next wave.

He further advised the states and other authorities across the country for marking containment zones and tracking of Covid-19 cases to contain the spread of the pandemic as prescribed by the Prime Minister.

He also said that vaccine production is rising gradually in the country, adding it is a planned affair and with this increment, vaccines are being made available.