All parties in UP want polls on time: CEC 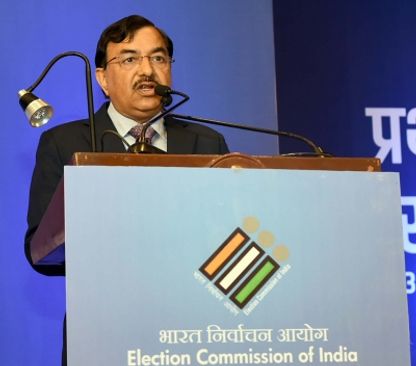 Chief Election Commissioner Sushil Chandra on Thursday said that the Assembly elections should be conducted on time following all Covid-19 protocols.

Lucknow, Dec 30: Chief Election Commissioner (CEC) Sushil Chandra on Thursday said that representatives of all political parties who met him during his visit to Lucknow, have said that the Assembly elections should be conducted on time following all Covid-19 protocols.

This is an indication that there will be no postponement of the elections in the poll-bound states.

Addressing the media at the end of his three-day visit, the CEC said that Uttar Pradesh now has 52.08 lakh new voters who will exercise their franchise in the upcoming assembly elections.

"In view of the increase in number of voters and also the prevailing pandemic condition, we have decided to set up 11,000 more polling booth to ensure that there is no crowding. With this, there will also be an increase in the number of polling personnel. We are also increasing the polling time by one hour across the state to prevent crowding at polling stations," he said.

The number of voters per polling booth has been reduced to 1,250 instead of the earlier 1,500 to ensure social distancing.

The CEC said that some political parties said that the number of rallies should be limited in view of the pandemic and some wanted deployment of paramilitary forces.

"We received some complaints about officers being biased and we have noted all complaints and suggestions," he said.

He further said that as a result of awareness campaigns, nearly 28.86 lakh new women voters had been enrolled, which is five lakh more than the men.

The CEC said that special arrangements would be made for senior citizens and divyangs at polling stations and they would also be given the option of postal ballets, lists of which would be made available to political parties.

"We have asked concerned officials to inspect the arrangements and ensure facilities for water, toilets, sitting arrangement, ramps and wheel chairs are available for voters."

He noted that all personnel on election duty would be fully vaccinated, while thermal scanners, masks, sanitizers would be available at polling stations.

"We have spoken to officials and asked them to step up vaccination so that the eligible population gets vaccinated by the time elections are held," he said.

The Election Commission will also set up 10 model booths in every Assembly segment this time.

Chandra said that he had discussed with police officials about the law-and-order situation and asked them to ensure the safety and security of voters, particularly women. Additional women police personnel will be deployed at polling stations.

"We have also asked other agencies to ensure that there is no distribution of money and liquor or any other freebie during elections," he said.
(IANS)