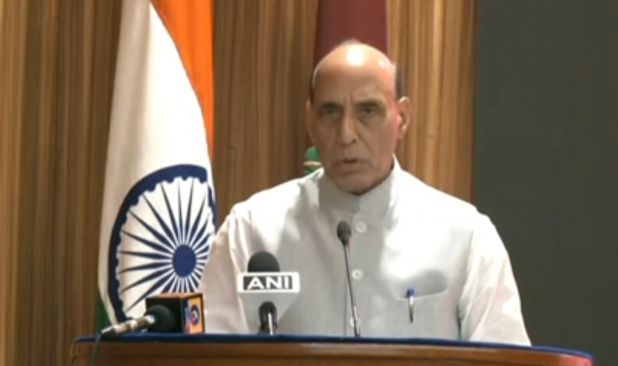 India's actions in Balakot and Galwan are clear signals to all aggressors, that any attempt to threaten sovereignty will be given a swift and befitting response, Defence Minister Rajnath Singh  said.

New Delhi, Sep 25: India's actions in Balakot and Galwan are clear signals to all aggressors, that any attempt to threaten sovereignty will be given a swift and befitting response, Indian Defence Minister Rajnath Singh said on Saturday.

Speaking at National Defence College Convocation ceremony, Singh said, "We are faced with belligerence on our land borders challenging the status-quo, cross border support to terrorism, and increasing efforts to counter our goodwill and outreach in our neighbourhood."

At Galwan Valley, Chinese People's Liberation Army had "unilaterally changed status quo" due to which clashes took place on June 15, 2020. India lost 20 soldiers and Chinese four. India and China are engaged in border dispute for last 16 months. Both the countries after clashes at Galwan Valley resorted to de-escalate the tension at the border through military and diplomatic talks.

On February 26, 2019, Indian Air Force fighter jets crossed the Line of Control and destroyed terror launch pads in Balakot in Pakistan. India's warplanes hit a Jaish-e-Mohammed camp in Balakot to avenge killing of 40 CRPF personnel in the Pulwama terror attack.

Singh asserted that India is totally committed to peace and goodwill amongst all nations but "threats to its internal and external security will no longer be tolerated".

"From a security perspective, the nation and our military are acutely aware that the future military strategies and responses will need proactive synergy amongst all elements of our armed forces to safeguard our national security interests," he said.

Singh pointed that while the conventional threat remains, the grey-zone threats necessitate the adoption of an "all of government" approach with all elements of state power coming together to anticipate and mitigate future challenges. "These not only come at a long term financial cost, but also undermines the intellectual capital of our own industry. No country that aspires to develop as a knowledge-based economy can sustain such reliance on defence imports," he said.

Talking about self-reliance, he said that one aspect where both knowledge and wisdom coincide is the ability to seek and gain self-reliance. India has for far too long remained dependent on import driven technologies.He also pointed out changing character of conflicts.

"Cyber, space, artificial intelligence, and big data analytics are some of the areas that are fast emerging as enablers in this context. The world has witnessed rapid transformation in all these areas of scientific knowledge," said the minister adding that this technological progression must be accompanied by its military interpretation within the strategic community.

"This is where the role of institutions like NDC again comes to the fore. Look beyond the obvious," he said.

He also talked about the idea of 'vasudhaiva kutumbakam' (the world is one family). "This thought of 'the world as a family' is not only relevant socially and economically in a globalised world, it can only reinforce the urgent need to create a unified approach to conflicts both within the country and globally. Be it against terrorism or cyber challenges, success can only come by unifying our national diversities," he said.