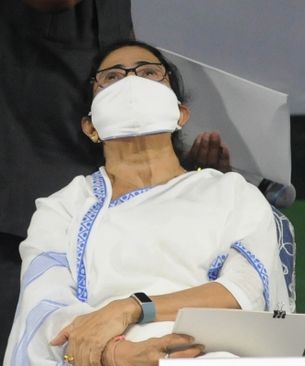 Trinamool Congress (TMC) leader and West Bengal Chief Minister, Mamata Banerjee, was shown black flags, allegedly by the activists of Hindu Yuva Vahini amid chants of 'Jai Shri Ram' and 'Modi-Modi' when she arrived in Varanasi on Wednesday night.

Mamata went to take part in the Ganga Aarti at the Dashashwamedh Ghat in Varanasi and to express her annoyance over the incident, she sat on the ghat steps instead of a chair and watched the Ganga Aarti.

The West Bengal chief minister's convoy was passing through Chetganj area when a group of Hindu Yuva Vahini workers started raising slogans like 'wapas jao' (go back) and waved black flags. They were restrained by the police present on the spot.

At this point, she stopped the vehicle and came out on the road. She kept on watching them for some time before moving to the ghat.

According to a leader of Samajwadi Party (SP) Manoj Rai Dhoopchandi, who was with Mamata at that time, she said that "it was the fear of defeat that made them act like this".

She also raised slogans "Jai UP, Jai Hind" and "Har-Har Mahadev", he said.

No action was taken by the police.

The Chetganj police said that action would be taken after the identification of the people involved in this incident.

Mamata Banerjee is in Varanasi to take part in an election rally of the Samajwadi Party supremo Akhilesh Yadav on Thursday.