Bhupendra Patel to continue as Gujarat CM for second term 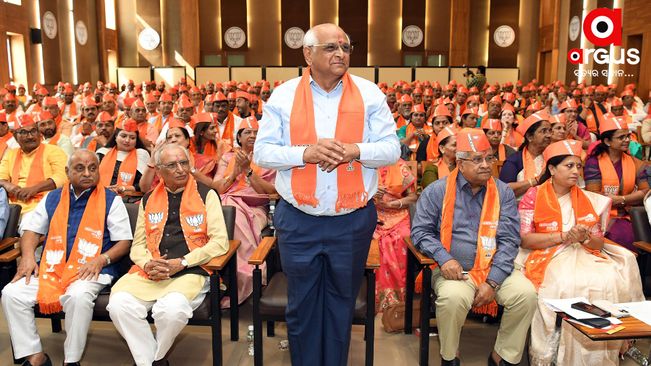 Gandhinagar, Dec 10: BJP's Bhupendra Patel has been elected Bharatiya Janata Party (BJP) legislative party leader and will take oath as chief minister of Gujarat for the second time on December 12.

The BJP is all set to form the government for a record straight seventh term in the state. Both Patel and state BJP president CR Patil today presented the letter of government formation to Governor Acharya Devvrat at Raj Bhawan.

The decision was taken after newly elected BJP MLAs selected him as the legislative party's leader during a meeting here at the party's state headquarters, Kamalam on Saturday. Senior BJP leaders Rajnath Singh, B S Yediyurappa, and Arjun Munda, all of whom were recently appointed as central observers for the state, were among those who attended today's meeting.

Patel's name was unanimously proclaimed as the leader of the legislative party.

"Today, a BJP MLAs meeting was held to choose the Party leader, and they have all chosen me," Patel said after the meeting.

"Once again, the people of Gujarat have supported the leadership of Prime Minister Narendra Modi", he added.

Speaking of his commitment to serve the state, he further said, "Under the leadership of PM Modi and Amit Shah, BJP will work again for the people of the state".

When asked if the Uniform Civil code (UCC) will be taken up in the first cabinet meeting of the new government, Patel said, "The committee has been formed. Work will be done on the basis of their recommendation".

As per sources, about 20 cabinet ministers will take oath along with Bhupendra Patel on Monday and take charge of their respective departments, the very next day.

Speaking about the likely cabinet, Surat West MLA Purnesh Modi told ANI: "The party's decision in the matter would be cordially welcomed."

Lauding their support for the candidates, Purnesh Modi said, "Everyone contributed wonderfully during the Gujarat campaigning, and the people of Gujarat stood strong with PM Modi."

Purnesh Modi was the Cabinet Minister of Transport, Civil Aviation, Tourism and Pilgrimage development in the previous government. He bagged 75.73 per cent of the total votes polled in his constituency and registered a win with a margin of more than 1 lakh votes, as per the Election Commission data.

Patel on Friday submitted his resignation to Governor Acharya Devvrat ahead of the formation of his new government.

BJP swept the Gujarat Assembly election with a whopping 156 out of the 182 Assembly seats, which is the highest number of seats any party has won after the formation of the state in 1960. It is now the largest mandate ever in the history of the state. With this win, BJP become the second party in the history of the country to have come to power for seven successive terms in a state.

The BJP has already announced that the new government's inauguration will take place on December 12, with Prime Minister Narendra Modi and Home Minister Amit Shah in attendance, as well as chief ministers from BJP-ruled states.