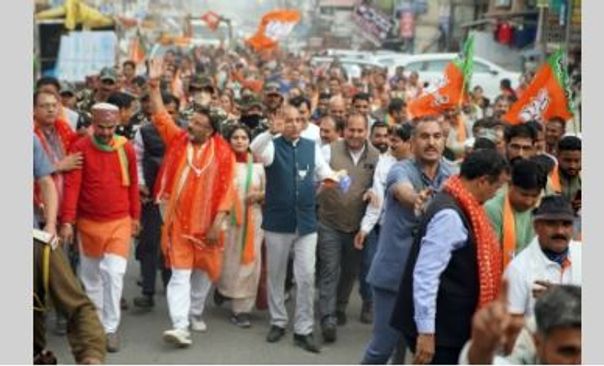 New Delhi, Dec 5: In a departure from electoral history, incumbent ruling party BJP looks all set to remain in power in Himachal Pradesh for another five years.

This was revealed by an IANS analysis of ABP-CVoter Exit Poll with a sample size of 28,697 across 68 Assembly constituencoes in the state.

If the numbers hold good, this will be the first time in decades that an incumbent regime will not be voted out after serving five years during an Assembly election.

Many political analysts were of the view that Himachal could be a low-hanging fruit for the Congress due to strong anti-incumbency sentiments. But in a replay of what happened in the 2022 Assembly elections in Uttarakhand, where the Congress failed to snatch the state from the BJP despite the immense popularity of Congress leader Harish Rawat, Himachal could prove to be a so near, yet so far phenomenon for the Congress.

For a while, the Aam Aadmi Party (AAP) appeared to mount a spirited challenge in the state and position itself as the real alternative to both BJP and Congress. But it diverted all its attention towards Gujarat. And the exit poll shows the effect of that.

AAP is projected to win no seats and garner a vote share of barely 2.1 per cent in Himachal.

If the exit poll numbers hold good, which will be confirmed once election results are announced on December 8, the outcomes will be deal yeat another blow to the Congress which seems unable to win Assembly elections after 2019. (IANS)