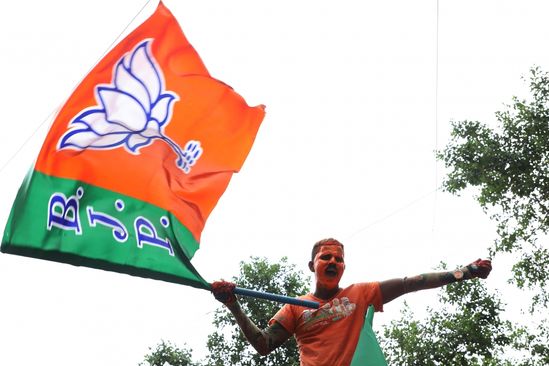 Gurugram, Jan 30: Bharatiya Janata Party workers on Saturday took out a "tiranga samman yatra" here to condemn the "insult" to the Tricolour at the Red Fort during the farmers' tractor parade in Delhi on January 26.

The yatra was organised under the leadership of local BJP MLA Sudhir Singla and the BJP district president Gargi Kakkar.

The BJP workers hoisted the national flag on a cavalcade of cars during the yatra that started from the old jail complex road and culminated in the Civil Lines' John Hall, covering a distance of around 3 km.

"The purpose of the "tiranga samman yatra" is to criticise those people who have insulted the national flag on January 26 at the national capital's Red Fort and give a strong message to those who had dishonoured the Tricolour during the farmers' tractor parade here on the occasion of Republic Day," a BJP worker, who was part of the procession, told media.

The saffron party leaders demanded stern action against those people who had unfurled another flag at the Red Fort.

Addressing the gathering, Singla said: "BJP strongly condemns such an act on Republic Day. The violence disrupted the life of common people and it was also a serious matter of concern about the safety of the national capital and historical monuments".

Kakkar said the Opposition parties were enacting a "drama" in the name of the farmers' agitation and trying to mislead the farmers.

"Respecting the Tricolour is the topmost responsibility of every citizen in the country, but some anti-social elements have dishonoured our national flag on January 26 which is not acceptable. The investigation agency will soon take necessary action against such people," added the BJP's district chief.