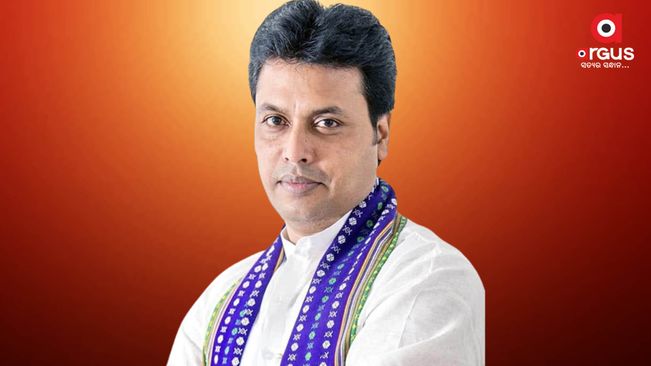 The ruling BJP on Friday night nominated former Tripura Chief Minister Biplab Kumar Deb as its candidate for the September 22 elections to the lone Rajya Sabha seat in the state.

New Delhi/Agartala, Sep 10: The ruling BJP on Friday night nominated former Tripura Chief Minister Biplab Kumar Deb as its candidate for the September 22 elections to the lone Rajya Sabha seat in the state.

Expressing his gratitude to the central leadership, Deb tweeted : "Gratitude to PM Shri Narendra Modi Ji, President Shri J P Nadda Ji and Home Minister Amit Shah Ji for nominating me as a BJP candidate for Rajya Sabha MP from Tripura. I am committed to work for the development and welfare of Tripura and it's people."

Earlier on Friday, BJP President J.P. Nadda appointed Deb as the state observer of Haryana. Deb, who on May 14 has stepped down from the post of Chief Minister following the directions of the central leaders, would take on CPI-M led Left Front candidate and former Tripura Finance Minister Bhanulal Saha in the upper house elections.

Dental surgeon-turned-politician Manik Saha, who became Chief Minister on May 15, a day after Deb resigned, and was elected to the Assembly in the June 23 by-elections, resigned from the Rajya Sabha on July 4, causing the vacancy.

Deb's election to the Rajya Sabha is almost certain as the ruling BJP (36) along with its ally -- Indigenous People's Front of Tripura (8) -- has the strength of 44 in the 60 member house while the opposition CPI-M has 15 MLAs.

The lone Congress MLA Sudip Roy Barman, according to the party sources, is likely to support the CPI-M led Left Front nominee in the RS polls. The Election Commission on Monday issued the statutory notification on Monday for the September 22 elections, and counting of votes would take place on the same day.  (IANS)