Channi sets aside formula of making CMs on rotational basis 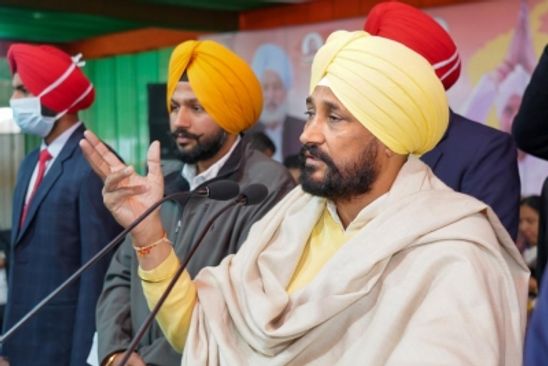 Chandigarh, Feb 6: Just hours ahead of the announcement of the Congress Chief Minister's face in the Punjab polls by party leader Rahul Gandhi, incumbent Charanjit Singh Channi, who is believed to far ahead of his close 'rival' Navjot Singh Sidhu, on Sunday set aside the prospective formula of making both CMs on a rotational basis, if the party retains the helm.

"This is not a 'lala ki dukan' (a petty-minded man shop)," he told the media. Without mincing words, Channi said he would respect the decision on the CM's face by the party high command.

Speculation is rife that a chance on rotational basis of the CM may be the 'middle-way' approach by the party high command to keep both camps of Channi and Sidhu in good humor and to prevent any annoyance, more likely from Sidhu.

It is learnt that both Channi and Sidhu could be made the CM face for 2.5 years each.

Party's state unit president Sidhu, who a day earlier said the CM's face will decide if 60 candidates become MLAs or not, on Sunday tweeted, "Nothing great was ever achieved without an act of decision...Warm welcome to our leading light Rahul Ji, who comes to give clarity to Punjab... All will abide by his decision!!!"

He triggered a row saying those at top want a "weak CM" who will toe their line.

Rahul Gandhi will announce the CM's face in his virtual address from Ludhiana city at 2 p.m.