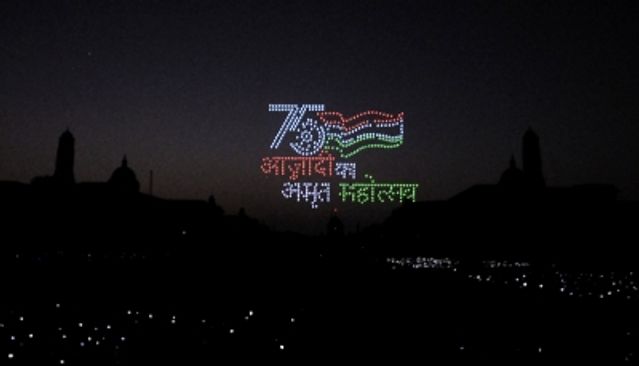 New Delhi, Jan 29:  Over 1,000 drones, dazzling in different colours, lit up the sky over the Lutyens' Delhi on Saturday during the Beating Retreat Ceremony.

The ceremony was held in the presence of President Ram Nath Kovind and Prime Minister Narendra Modi.

The drone show was organised by a startup 'Botlab Dynamics' which was supported by Indian Institute of Technology (IIT) Delhi, and Department of Science & Technology.

The show continued for around 10 minutes involving around 1,000 drones fabricated through indigenous technology.

A synchronised background music was also played during the drone show.

Union Minister Dr Jitendra Singh said it was a world record created by India by flying 1,000 drones during the ceremony.

During the 10-minute show, over 1,000 drones, in different formations along with a background voice, showcased a series of extravagant sunset troop manoeuvres during the ceremony.