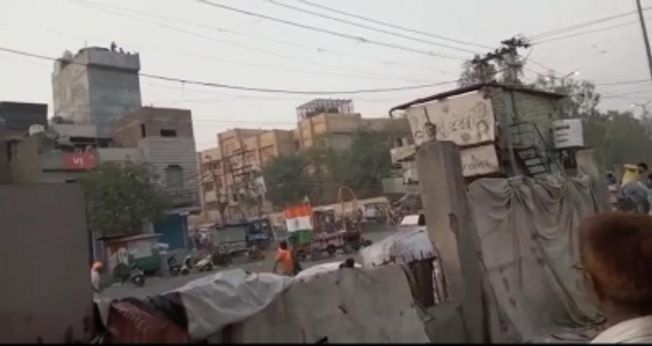 Delhi Police has arrested a total of 20 people and apprehended 2 juveniles in case of a communal violence that erupted during a Shobha Yatra procession on the occasion of Hanuman Jayanti in the national capital, officials said on Sunday.

New Delhi, Apr 17: Delhi Police has arrested a total of 20 people and apprehended 2 juveniles in case of a communal violence that erupted during a Shobha Yatra procession on the occasion of Hanuman Jayanti in the national capital, officials said on Sunday.

Apart from them, two juveniles were also apprehended.

Deputy Commissioner of Police (northwest) Usha Rangnani said three firearms and five swords have also been recovered from the possession of the arrested persons.

The clashes broke out between the two groups of people when the Shobha Yatra procession was passing through the road just next to Kusal Cinema Hall, on the opposite side of which is a mosque.

As per several videos of the procession accessed by IANS, people can be seen wielding swords and chanting religious slogans just before the clashes broke out.

According to the FIR lodged at the Jahangirpuri police station, the Shobha Yatra procession was passing off peacefully, but at around 6 p.m., when they reached outside a mosque, the accused Anshar came there with his 4-5 associates and started arguing with the participants of Shobha Yatra.

The argument soon turned violent and both the sides started pelting stones at each other.

"I, Inspector Rajiv Ranjan Singh, tried to pacify the situation and separated the two groups, however, within some time, they again started pelting stones after which I informed the Police Control Room about the development," read the FIR.

Soon after this, more police force reached the spot along with senior officials, however, by that time the mob had turned completely violent. The mob pelted stones on the police force and also fired shots at them.

At least 8 policemen were injured.

To contain the situation and disperse the crowd, the police fired 40-50 tear gas shells. Amid the pandemonium, one scooty was torched and 5-6 cars were vandalised.

The Police normalised the situation with the help of paramilitary forces and at around 8 p.m. in the evening the situation was under control, yet tense.

Later, the area became the epicentre of the heavy police deployment, with the road, where the violent clashes took place, extensively barricaded from all sides.

On Sunday, the situation was under control and an adequate number of police force was deployed there to avert any untoward incident.

The police said that area domination, foot patrolling and deep deployment has been ensured to assure people and to maintain law and order in the area.

Meanwhile, the personnel of Delhi Police carried out preventive patrolling and area domination throughout the night in the backdrop of violent clashes.

Delhi Police is also in talks with the members of the Aman committee. During the meeting, all the members were asked to appeal to the public in their areas to maintain peace, harmony and tranquility.

"They were also requested to counter any rumour or misinformation, be vigilant towards the activities of any mischievous and anti-social elements, to keep in touch with police and to ensure immediate reporting of anything suspicious that comes into their notice," a senior official said.