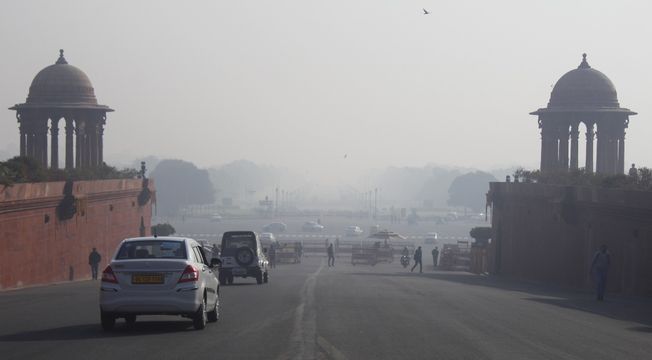 The air quality index (AQI) crossed the 600-mark at several places across Delhi on Friday Morning.

New Delhi, Nov 5: The air quality index (AQI) crossed the 600-mark at several places across the national capital with a few places in east Delhi, Ghaziabad and Noida crossing the 800-mark on Friday morning, hours after the people burst firecrackers on Diwali night making the Delhi-NCR air hazardous.

The already severe condition of the air quality on Thursday evening deteriorated further with pm2.5 concentration at 467 and pm10 concentration at 631 at 9 a.m., according to SAFAR data. There was moderate fog early in the morning, indicative of air quality may not improve much for the day.

The fog conditions intensified in Delhi-NCR on Friday with moderate fog at visibility 200 to 500m range reported at its two airports from 5.30 a.m. to 8.30 a.m.

Indira Gandhi International Airport (IGI) Palam lowest visibility was 350m while the city side had a poorer visibility at 200m, said the India Meteorological Department (IMD).

At 9 a.m., AQI was 920 and 904 in Noida's sector 116 and in Sector 62 respectively; 617 in Ghaziabad's vasundhara; 897 and 699 in Delhi's Patparganj and Sriniwaspuri respectively, according to the data from World Quality Index project, a non-profit organisation.

However, the data given by CPCB did not reflect these station's and showed much lesser AQI levels for other stations.

The Meteorological agencies had predicted an AQI of 500 plus for Thursday and Friday if Delhiites burst firecrackers on Diwali day. However, none of the stations touched the 500-mark.