If Sidhu does not relent, hunt on for new chief of Punjab Congress 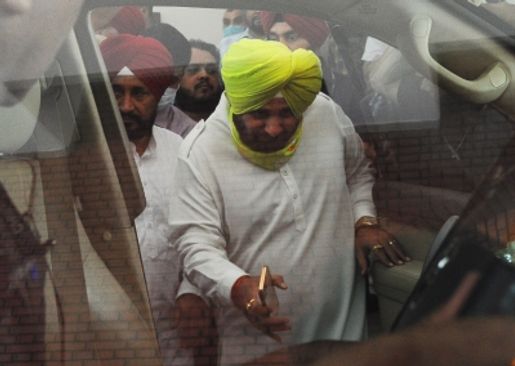 While the Congress leadership is reaching out to Navjot Singh Sidhu who resigned from the Punjab chief's post and is trying to pacify him to take back his resignation.

New Delhi, Sep 29: While the Congress leadership is reaching out to Navjot Singh Sidhu who resigned from the Punjab chief's post and is trying to pacify him to take back his resignation, sources have said that the Congress is also looking for likely replacement in case he does not relent.

The sources said, General Secretary and Congress in-charge of Punjab, Harish Rawat is talking to all the senior leaders and has placed himself in an undisclosed location in Delhi. A meeting with former Chief Minister Amarinder Singh is also not ruled out as he has vacated Kapurthala House in Delhi on Tuesday night.

The Congress is mulling on some names for immediate replacement and one of them is Manish Tewari, the MP from Anandpur Sahib. Names of Ravneet Singh Bittu, Ludhiana MP and from Amarinder Singh's camp and Pratap Singh Bajwa, who is opposed to Amarinder Singh, are also doing the rounds. Former PCC President Sunil Jakhar who missed the Chief Minister's post during the recent process of change of guard is also likely to be considered.

The Congress also wants to pacify former Chief Minister Amarinder Singh, so Bittu can be considered as he has political lineage (grandson of former Punjab Chief Minister Beant Singh) and has good rapport with the party's central leadership. Though Rawat office says that he will speak when it is necessary.

Navjot Singh Sidhu on Wednesday said he will fight for the truth till his last breath as the fight is for principles that he won't compromise with.

"I will fight for truth until my last breath," Sidhu said in a video message posted on his Twitter handle.

"It is not a personal battle but a fight for principles. I won't compromise on principles," Sidhu said categorically.

Without mincing words, he said he would not accept tainted ministers being brought back into the newly constituted state cabinet led by Charanjit Singh Channi, a first-timer Scheduled Caste Chief Minister in the state.

In the video message in Punjabi, the cricketer-turned-politician, who said his only religion is to make people's lives better, said he had fought for justice and for Punjab's agenda.

"What I witness is a compromise with issues, agenda in Punjab. I can't disguise high command nor can I let them be disguised," he said.
(IANS)