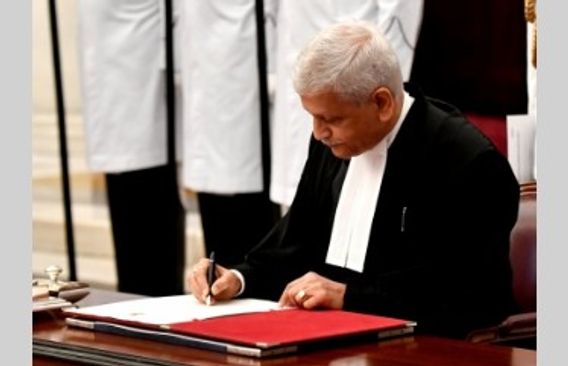 Chief Justice of India U.U. Lalit on Friday said that 1,293 miscellaneous matters, 106 regular matters, and 440 transfer matters were disposed of by the apex court in the last four days.

New Delhi, Sep 2: Chief Justice of India U.U. Lalit on Friday said that 1,293 miscellaneous matters, 106 regular matters, and 440 transfer matters were disposed of by the apex court in the last four days.

In his address at a felicitation function organised by the Bar Council of India, he said the apex court is giving more and more emphasis to dispose of regular matters and added that his Secretary General has put figures that last four days show that 1,293 miscellaneous matters, 440 transfer matters were disposed of, and in the last two days, 106 regular matters were disposed of.

The Chief Justice, thanking all the representatives of state Bar councils, said that he would sincerely do his best to live up to their expectations, and the apex court would try to dispose of as much matter as it can.

On August 26, then Justice Lalit, speaking at the farewell function of Chief Justice N.V. Ramana organised by the SCBA, had said that he intends to make the listing of cases clear and transparent, a clear regime for mentioning urgent matters before respective benches, and one Constitution bench functioning throughout the year.

On August 27, President Droupadi Murmu administered the oath of office to Justice U.U. Lalit as the Chief Justice of India.

On August 13, 2014, he was elevated to the apex court directly from the Bar. Chief Justice Lalit would be having a short tenure of less than three months as the CJI. He will retire on November 8.

Chief Justice Lalit, who specialises in criminal law, was designated as a senior advocate by the Supreme Court in April 2004. He was appointed as the special public prosecutor by the top court for the CBI in all the 2G spectrum scam cases. He had also worked with former Attorney General Soli Sorabjee between 1986 and 1992. (IANS)