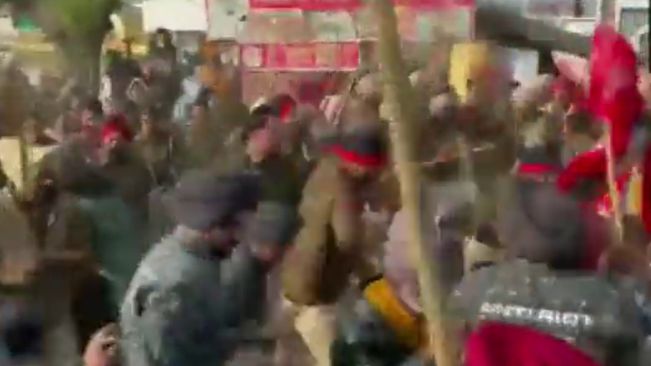 Sangrur, Nov 30: Punjab Police on Wednesday resorted to a lathi-charge on members of the agriculture labour unions who were marching towards Chief Minister Bhagwant Mann's residence in Sangrur over their various demands.

The protestors, who included agricultural workers, gathered at the Patiala bypass after which they started moving towards the Chief Minister's residence where there was heavy police deployment. The police tried to stop the protestors who included members of eight labour organizations and resorted to the use of force which left some of the protestors injured.

Police, however, said that they did not resort to lathi-charge and stated that "an aggressive faction of protestors indulged in a scuffle".

"No lathi charge was done, and the protest is going on in a peaceful manner. An aggressive faction of protestors indulged in a scuffle, which was later controlled by the police. We have taken cognizance of their demands," Senior Superintendent of Police (SSP) Sangrur said.

Manjinder Singh Sirsa accused Delhi Chief Minister Arvind Kejriwal of showing his "true face" and said the people of Punjab will give a befitting reply to the injustice done to them.

"Kejriwal showed his true form through lathi-charge on Punjab farmers sitting on dharna outside CM Bhagwant Mann's house. Instead of giving the farmers their rights, Kejriwal is weakening Punjab by investing money of Punjab in Gujarat campaign. Punjabis will give a befitting reply to this injustice of Kejriwal," Sirsa said in a tweet.

He also said that making promises before elections and not fulfilling them later is the "new change" brought by AAP.

"Instead of giving rights to the farm labourers protesting outside the house, doing lathi charge at them is proof of the atrocities of Arvind Kejriwal and Bhagwant Mann. Making promises before the elections and not fulfilling them after the elections is the change by AAP. People of Delhi and Gujarat should stay away from this deceitful party," Sirsa said in another tweet.

"The workers who were peacefully going towards the CM's residence were brutally lathi-charged. It shows the real face of AAP. It stands for 'anti-People anti-peasant party'. CM Bhagwant Mann is busy campaigning in Gujarat and the farmers of Punjab have been left in miserable condition," he said.