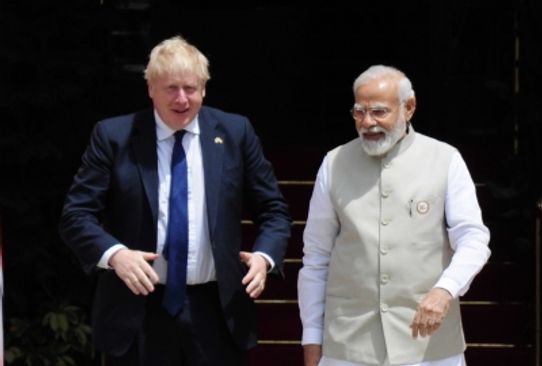 Prime Minister Narendra Modi and his visiting British counterpart Boris Johnson began talks on Friday to further intensify the multi-faceted ties between India and the UK.

Before commencing the talks, Modi welcomed and greeted Johnson at the forecourt of the Hyderabad House.

Trade and easier visas are on the agenda, apart from defence cooperation and renewable energy.

The two nations enjoy a long and historical relationship that was elevated to a Comprehensive Strategic Partnership during the India-UK Virtual Summit last year.

The multi-dimensional relationship ranges from trade and economy, health, science and technology, defence and security, climate change to close cooperation on multilateral issues.

In a statement, the British High Commission said that UK and Indian businesses are going to confirm more than 1 billion pounds in new investments and export deals on Friday in areas from software engineering to health, creating almost 11,000 jobs across the UK.

Also on Friday, External Affairs Minister S. Jaishankar met Johnson during which they discussed the expansion and implementation of the India-UK Roadmap 2030.

Johnson arrived in India on Thursday, marking his first visit to the country after becoming the British Prime Minister in 2019.

On Friday morning, he was given a ceremonial reception and a Guard of Honour at the Rashtrapati Bhawan where he was received by Modi.