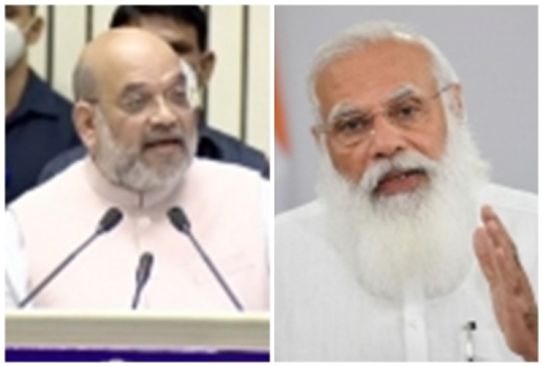 Gandhinagar, July 30: Prime Minister Narendra Modi and Union Home Minister Amit Shah will virtually join the celebrations between August 1 and 9 to mark the five years of the Rupani-Nitin Patel government in Gujarat.

About a-year-and-a-half before the state Assembly elections, the government wants to reach out to the various sections of the society through the celebration.

According to information available, both Modi and Shah will virtually participate on two separate days during the nine-day celebrations.

Modi will be virtually present in the 'Annotsav celebration' (food festival) on August 3 during which he will interact with the beneficiaries of free ration under the Pradhan Mantri Garib Kalyan Yojana from five districts. He is also expected to virtually distribute food kits to the poor. The state government has planned to distribute a kit containing 5 kg foodgrain free of cost to around 4.25 lakh poor people from 17,000 fair price shops across the state. The state-level event for 'Annotsav' will be held at Dahod, where CM Rupani will be present.

Vijay Rupani replaced the then Chief Minister Anandiben Patel and took over the reigns of the state on August 7, 2016, becoming the 16th Chief Minister of Gujarat. Nitin Patel was named as his deputy in the government then.

During the nine-day celebration various people-oriented works will be intensified while expansion of flagship schemes of the government is also planned. CM Rupani's birthday also falls during the celebration on August 2.

The celebratory programmes will be based on the theme of welfare of various segments of the society and governance like education, women's empowerment, farmers' welfare, tribals' welfare, employment and urban development.

Union Home Minister Shah will virtually attend 'Vikas Diwas' event on August 7. The main event that day will be held at the Mahatma Mandir in Gandhinagar in the presence of Rupani, Pate and state BJP president C.R. Paatil. Inauguration or laying of the foundation stones for various projects worth Rs 3,906 crore like housing for the poor, new bridges in Ahmedabad and Banaskantha, water pipeline in Mehsana and power substations will be carried out by Shah.

According to the information released, August 1 will be celebrated as the Gyanshakti Diwas', where the government will organise education-related programmes. On August 2, 'Samvedna Diwas' will be observed where the state will help citizens get necessary forms and documents related to various government schemes.

August 4 will be celebrated as 'Nari Gaurav Diwas', where women-centric events are planned. August 5 will be Kisan Sanman Diwas' with various events organised for farmers.

August 6 will be celebrated as 'Rozgar Diwas', and the state government will organise 50 job fairs and other events aimed at providing employment to Gujarat's youths. The government has selected 50,000 youths for various posts in the state-run boards and Corporations, who will be issued appointment letters.

'Vikas Diwas' will be celebrated on August 7, where projects worth Rs 5,855 crore will be launched or dedicated and August 8 will be celebrated as 'Shaheri Jan Sukhakari Diwas' (related to improving urban infrastructure and amenities).

August 9 is being celebrated as 'Adivasi Diwas'. Marking this, programmes will be held in 53 tribal Tehsils of the state. Various tribal-centric projects will be launched on the day.
(IANS)