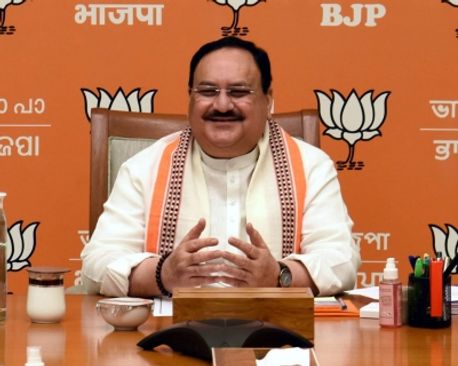 New Delhi, Nov 5: Ahead of first National Executive Committee (NEC) meeting in two years on Sunday, BJP chief J.P. Nadda will chair office bearers meet to discuss the agenda and resolution to be passed in a meeting on Saturday.

The NEC meeting will discuss strategy for forthcoming assembly elections in five states and other current issues. Sources said that results of recent bypolls will be also discussed in the NEC.

The NEC meeting will start at 10 a.m. and will conclude at 3 p.m. on Sunday afternoon at the NDMC Convention Centre here. This will be the first NEC meeting after the 2019 Lok Sabha polls.

The NEC is important ahead of assembly elections in Uttar Pradesh, Uttarakhand, Punjab, Manipur and Goa early next year. "Party strategy and road map for assembly polls in five states will also be discussed during the NEC," a party insider said. Sources further said that along with forthcoming assembly elections and other current issues, the NEC, the key decision making body of the party, might also discuss bypoll results declared on November 2 in which the BJP performed poorly in Himachal Pradesh, Rajasthan and West Bengal while swept Assam.

The NEC meeting will start with Nadda inaugural address and conclude with Prime Minister Narendra Modi valedictory speech. In view of Covid protocols, only national office bearers, union ministers who are members of NEC and Delhi BJP NEC members will physically attend the meeting at NDMC Convention Centre. All state presidents, state general secretaries (organisation) and NEC members of that respective state will attend the meeting virtually from their respective state party offices.