Not Indian culture to denigrate any religion: VP Naidu 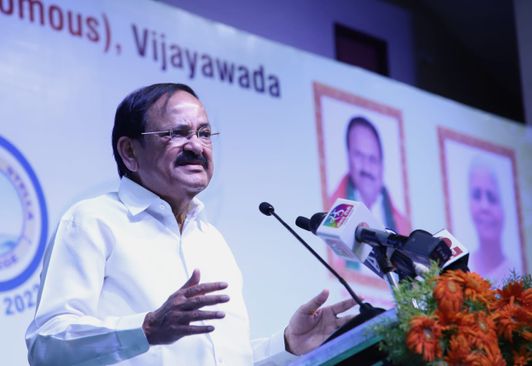 New Delhi, Jul 16: Vice President M Venkaiah Naidu on Friday cautioned against forces and vested interests that are threatening the nation's peace and integrity through a divisive agenda.

Stressing that it is 'not Indian culture to denigrate any culture, religion or language', he called upon every citizen to take responsibility to thwart such attempts to weaken India, unite and guard the nation's interests. The Vice President underscored that India's civilisational values teach respect and tolerance towards all cultures and sporadic incidents cannot undermine India's secular ethos.

Decrying attempts made to diminish India's image on the international stage, Naidu reiterated that India's parliamentary democracy and pluralistic values are a model to emulate for the world.

Releasing a book on the life journey of freedom fighter and journalist Damaraju Pundarikakshudu in Vijayawada today, Naidu said that 'Azadi ka Amrit Mahotsav' gives us an opportunity to recall the many sacrifices made by our leaders and freedom fighters during the freedom struggle.

Naidu complimented Yallapragada Mallikarjuna Rao, the author, for his efforts in the research and compilation of the book.

Noting the great efforts of Damaraju in popularising Gandhiji's contributions through songs and drama, Naidu called upon media houses to highlight the efforts of Indian freedom fighters through special programmes and a series of articles to make the younger generations aware of our leaders' life lessons.

The Vice President also called upon the youth to strive towards building an India free of poverty, illiteracy, social discrimination and atrocities against women as a 'true tribute to our freedom fighters' sacrifices'.

He reminded us that a 'divide' in society - between urban and rural areas, between social classes and between the genders - ultimately weakens the country.

Naidu, recalling the various efforts of leaders from the region during the struggle for independence, appreciated the gesture of Prime Minister Narendra Modi in recently unveiling the statue of the great freedom fighter, Alluri Sitarama Raju in Bhimavaram, Andhra Pradesh.

On this occasion, the Vice President also distributed certificates to the trainees of various skill development programmes in Swarna Bharat Trust, Vijayawada.

He encouraged them to work hard in their chosen discipline and achieve success.