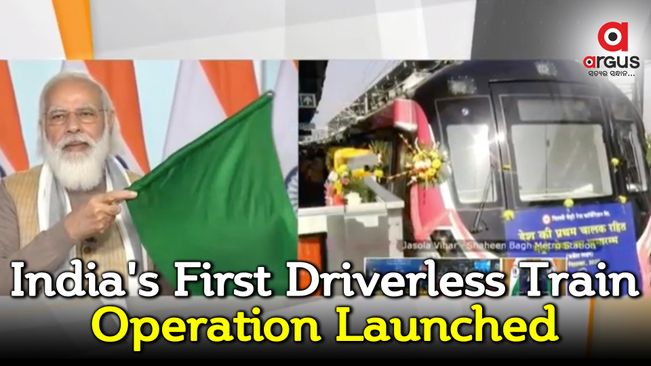 Today the National Common Mobility Card was expanded to the Airport Express Line of Delhi Metro, which was started in Ahmedabad last year. Union Minister Hardeep Puri and Chief Minister of Delhi, Arvind Kejriwal were present on the occasion.

Speaking on the occasion, the Prime Minister termed today's event as an attempt to make urban development future ready. He said preparing the country for future needs is an important responsibility of governance. He lamented the fact that a few decades ago, when the demand of urbanisation was felt, there was not much attention given to the needs of the future, half-hearted work was done and confusion persisted. He said unlike this, modern thinking says that urbanization should not be seen as a challenge but used as an opportunity to build better infrastructure in the country, an opportunity through which we can enhance Ease of Living.

The Prime Minister remarked that the government formulated the metro policy for the first time and implemented it with an all-round strategy. Emphasis was on working according to local demand, promoting local standards, Make in India expansion and use of modern technology.

The Prime Minister said with the achievement of Metro Rail without a driver, our country has joined the select countries of the world where such facilities are available. He said a braking system in which 50 percent of the energy goes back into the grid when the brakes are applied are being used. Today 130 MW of solar power is being used in metro rail, which will be increased to 600 MW.

Talking about the Common Mobility Card, the Prime Minister said that providing the same standards and facilities for modernization is very important. The Common Mobility Card at the national level is a major step in this direction. This one card will give integrated access to the commuters wherever they travel, whichever public transport they take.

Taking the example of the Common Mobility Card, the Prime Minister dwelled on the process of consolidating all the systems. Through such consolidation of systems, the strength of the country is being harnessed in a more coordinated and efficient way.  “Like One Nation, One Mobility Card, our government has done many things in the past years to integrate the systems of the country,” Modi said.

One Nation, One Fastag has made travel seamless on highways across the country. This has saved commuters from jam and delays. One Nation, One Tax i.e. GST has ended the complications in the tax system and has brought uniformity in indirect tax system.  One Nation, One Power Grid, is ensuring adequate and continuous power availability in every part of the country. Power loss is reduced.