PM leads nation in mourning the passing of 'Lata Didi' 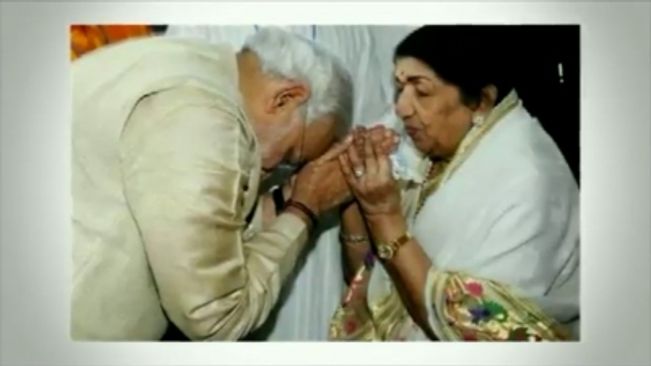 New Delhi, Feb 6: Prime Minister Narendra Modi led the nation in mourning the death of the Nightingale of India, Lata Mangeshkar, who succumbed to multiple organ failure after 28 days of hospitalisation at Breach Candy Hospital, Mumbai, on Sunday.

In his heartfelt tweet, the Prime Minister said: "I consider it my honour that I have always received immense affection from Lata Didi. My interactions with her will remain unforgettable. I grieve with my fellow Indians on the passing away of Lata Didi. Spoke to her family and expressed condolences. Om Shanti."

Union Minister for Road Transport and Highways, Nitin Gadkari, who was among the first to meet the bereaved family in the hospital, said in his condolence message: "Her passing is an irreparable loss to the nation. But for all lovers of good music, she'll forever remain a source of inspiration." Gadkari called the departed singer "the nation's pride".

Echoing the sentiments of the Hindi film world, ace producer Boney Kapoor said: "She leaves behind a huge legacy of songs which will be treasured for generations to come."

Singer-music composer Vishal Dadlani went down memory lane and tweeted: "She called me during the last Indian Idol season. She was full of laughter and joy when talking about music. I'm broken at the thought of that chat with her. So grateful for all that #LataMangeshkar ji taught me and every musician in India, and that I got to thank her in person."

"Meri Awaaz Hi Pehchaan Hai, Gar Yaad Rahe ... and how can one forget such a voice! Deeply saddened by the passing away of Lata Mangeshkar ji, my sincere condolences and prayers. Om Shanti," tweeted Akshay Kumar.

Ajay Devgn spoke for all of India when he said: "An icon forever. I will always savour the legacy of her songs. How fortunate were we to have grown up listening to Lataji's songs."

In his tribute, India's former Test captain Virat Kohli said: "Her melodious songs touched millions of people around the world. Thank you for the music and the memories."

'Aligarh' and 'Scam 1992' maker Hansal Mehta was one of the first to tweet: "The nightingale moves on. The heavens are blessed. There will never be another Lataji."