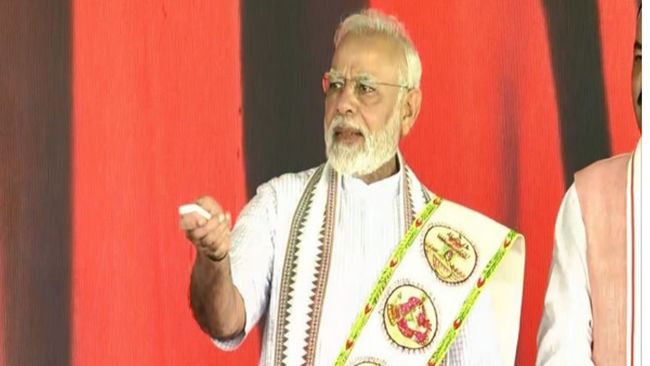 Jalaun, Jul 16: Prime Minister Narendra Modi on Saturday inaugurated the Bundelkhand Expressway in Uttar Pradesh's Jalaun.
Chief Minister Yogi Adityanath was also present on the occasion.
Earlier, the Prime Minister arrived at the Kanpur airport where he was received by the Chief Minister and other dignitaries.
The 296 km four-lane Expressway has been constructed at a cost of around Rs 14,850 crore. The expressway would give a major boost to connectivity and industrial development in the region.
The Modi government has focused greatly on connectivity and infrastructure, officials said.
The budgetary allocation of Rs 1.99 lakh crore for the Ministry of Road Transport and Highways in Budget 2022-23 is the highest ever. This is a jump of over 550 per cent when compared to the allocation of about Rs. 30,300 crore in 2013-14.
In the last seven years, the length of National Highways in the country has gone up by more than 50 per cent from 91,287 km (as on April 2014) to around 1,41,000 km (as on December 31, 2021).
The foundation stone for the construction of the Bundelkhand Expressway was laid by the Prime Minister on February 29, 2020. The work on the Expressway has been completed within 28 months.
The 296 km, four-lane expressway has been constructed at a cost of around Rs 14,850 crore, under the aegis of Uttar Pradesh Expressways Industrial Development Authority (UPEIDA), and can later be expanded up to six lanes as well.