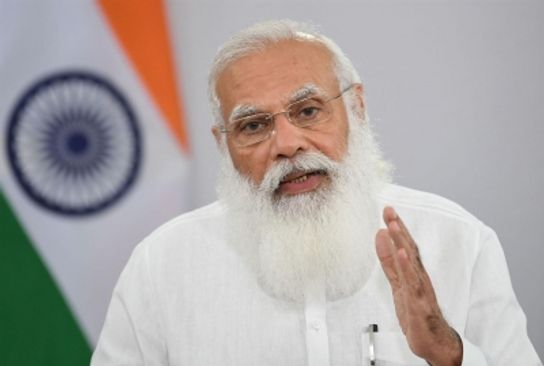 New Delhi, July 13: Expressing his concern over the growing number of Covid cases in some districts of the northeastern states during an interaction with the Chief Ministers of the region, Prime Minister Narendra Modi on Tuesday stressed on the need to catch these signals and take strict actions at the micro level.

The Prime Minister re-emphasised the use of micro containment protocol in dealing with the situation and asked the CMs to make full use of the experience and best practices gathered over the last one-and-a-half years in this regard.

Modi made the remarks while interacting with the Chief Ministers of Nagaland, Tripura, Sikkim, Meghalaya, Mizoram, Arunachal Pradesh, Manipur and Assam on the Covid-19 situation in the region.

The Prime Minister also lauded the people, health workers and the governments of the Northeast for their hard work in the fight against the pandemic and for creating infrastructure for testing, treatment and vaccination despite the difficult terrains of the states.

Noting the fast-mutating nature of the virus, the Prime Minister advised strict monitoring of the mutation and keeping track of all the variants. He informed that experts are studying the mutations and their impact.

In such a scenario, prevention and treatment are critical, Modi said while emphasising Covid appropriate behaviour.

The Prime Minister also emphasised the utility of physical distancing, wearing masks, and vaccination. "Similarly, strategy of testing, tracking and treatment is a proven strategy," he said.

Acknowledging the impact of the pandemic on tourism and business, the Prime Minister cautioned against crowding at the hill stations without taking proper precautions.

Rejecting the argument that people want to enjoy before the arrival of a possible third wave of the pandemic, Modi said that one must understand that the third wave will not come on its own, and the main question in people's mind should be how to prevent its possible outbreak.

Referring to repeated warnings against carelessness and crowding by the experts, the Prime Minister said these habits can lead to a massive surge in cases, as he strongly advocated preventing avoidable crowding.

Modi said that in the 'vaccine for all - free for all' campaign of the Central government, the Northeast too is given the same importance, and one needs to keep accelerating the vaccination process.

To deal with the myths pertaining to vaccination and mobilising people, the Prime Minister asked the CMs to enlist the help of social/educational institutes, celebrities and also the organisations of religious faith.

He asked to accelerate the vaccination drive in the areas where the spread of the virus is expected.

Referring to the recent Cabinet nod to the Rs 23,000 crore package for improving the infrastructure for testing and treatment, the Prime Minister said that the package will help in strengthening the health infrastructure of the Northeast region.

"This package will expedite testing, diagnostics and genome sequencing in the Northeast," he said.

The Prime Minister further stressed on the need to quickly increase the number of beds, oxygen facilities and paediatric care infrastructure in the Northeast, and informed that hundreds of oxygen plants are being established in the country through the PM-CARES Fund and the Northeast region too has got about 150 plants.

The Prime Minister urged the CMs to complete the process of establishing these plants quickly.

Underlining the need to establish temporary hospitals due to the geographical situation of the Northeast, Modi asked them to prepare trained manpower for the oxygen plants, ICU wards and new machines that are reaching the block level hospitals.

He assured all help from the Central government.

Noting the capacity of 20 lakh tests per day in the country, the Prime Minister highlighted the need to augment the testing infrastructure in the affected districts on a priority basis.

He further stressed on aggressive testing along with random testing and expressed hope that India will surely be able to contain the spread of the virus with the collective efforts.

Apart from the Chief Ministers, Union Ministers for Home, Defence, Health, DoNER and other ministers were present during the interaction.

The Chief Ministers briefed about the progress of vaccination in their states and the steps that are being taken to take the drive to the far-flung areas. They also discussed the issue of vaccine hesitancy and the measures being taken to overcome it.

They gave an account of improvement in medical infrastructure to better tackle Covid cases, and the support lent through the PM-CARES Fund. They gave assurance of taking timely action to bring down the positivity rate as well as the number of cases in their states.

Union Home Minister Amit Shah talked about the reduction in the overall daily number of cases but forewarned that this should not lead to one becoming lax and letting one's guard down.

He said that some areas of the country are witnessing high positivity rates, and emphasised on the importance of testing, tracing, tracking and vaccination.
(IANS)