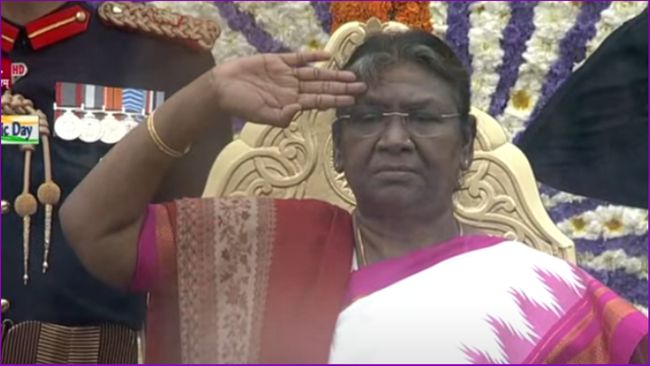 New Delhi, Jan 26: President Droupadi Murmu commenced the celebrations of the 74th Republic Day, for the first time since assuming office last year, by unfurling the national flag at Kartavya Path on Thursday.

Keeping with traditon the unfurling of the Tricolour was followed by the national anthem and a customary 21 Gun Salute. Notably, it was for the first time that the 21 Gun Salute was given with 105 mm Indian Field Guns. It replaced the vintage 25-pounder gun.

The 21 Gun Salute is presented during Republic Day, Independence Day and visits of foreign Heads of State.

The President on her arrival at Kartavya Path was received by Prime Minister Narendra Modi. The National Flag was unfurled at Kartvya Path by an Air Force Officer, Flt Lt Komal Rani. Simultaneously, the National Anthem was played and the 21 Gun Salute was presented to the President.

To the left of the President's Car was the Second-in-Command of the Regiment, Lt Col Ramakant Yadav, mounted on his charger Sultan. It is the senior-most Cavalry Regiment carrying out mounted ceremonial duties for the President.

President of Egypt Abdel Fattah El-Sisi is the Chief Guest at this year's parade.