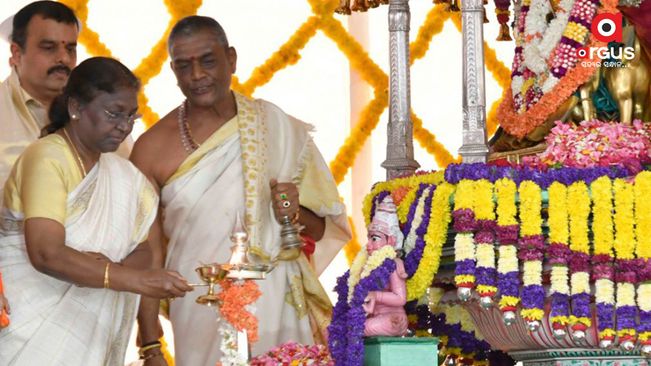 Addressing the gathering, the President extended her greetings to the people of Karnataka on the auspicious occasion of Mysuru Dasara. She said that she prays to the Goddess Chamundeshwari that her blessings will always be available to all.

The President said that the sages as well as people of our country have kept the Indian society connected for centuries through festivals. Festivals based on divine and human characters from Ramayana, Mahabharata, Puranas, history and folk-tales are celebrated all over the country. She said that there is diversity as well as uniformity in these festivals. Mysuru Dussehra is also a festival of pride for Indian culture, she added.

Speaking about the developmental journey of Karnataka, the President noted that during the financial year 2021-22, Karnataka attracted 53 per cent of the total foreign direct investment in the hardware and software sector. Bangalore is considered to be the top start-up-hub of India.

Later in the day, the President attended a felicitation function ‘Poura Sanmana’ organized by the Hubli-Dharwad Municipal Corporation at Hubali.

Speaking on the occasion, the President expressed her gratitude to all the residents of the city and said that by felicitating her they have not only felicitated the President of India but all the daughters of India.

The President said that the twin cities of Hubli-Dharwad are part of the glorious history of not only Karnataka but the whole of India and their presence on the cultural map of India has been remarkable. She noted that the North Karnataka region has many famous education centers of medical, engineering, law, science, arts and technology. Probably for that reason, this region is called 'Vidya-Kashi'.

In the next engagement, the President inaugurated the new campus of the Indian Institute of Information Technology Dharwad at Dharwad.

Addressing the gathering, the President said that it is a matter of pride for us that IIIT Dharwad is preparing the future of our nation through education. She noted that this institution is in the category of ‘Institute of National Importance’. She appreciated the Government of India, Government of Karnataka and other stakeholders for their efforts.

The President noted that the tag line of IIIT Dharwad is “Gyan Vikash” which means that development and progress can be achieved through knowledge. She said that to achieve the goal of development, it is necessary that our youth, who are an integral part of this resource, should be skilled in the technical education of the new system. Noting that IIIT Dharwad curriculum has subjects like Computer Science, Electronics and Communication, Data Science and Artificial Intelligence, she said that all these subjects have the potential to contribute significantly to the making of a new India.

The President said that the world is changing at a rapid pace. Our country is also experiencing a digital revolution through the Digital India Mission. But to take full advantage of this revolution, we have to promote our research and innovation even more.