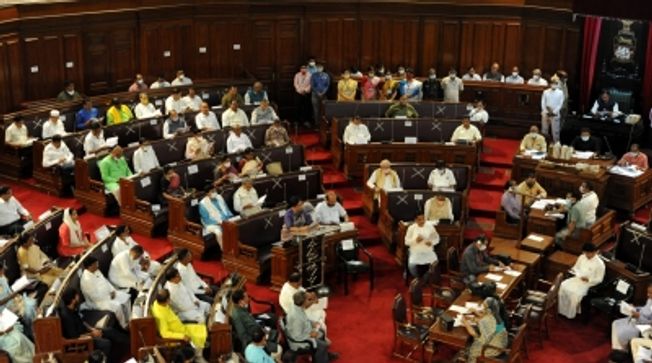 A major ruckus broke out in West Bengal Assembly on Monday afternoon after Speaker Biman Bandopadhyay refused to admit an adjournment motion brought by Opposition BJP legislators seeking discussions on the teachers' recruitment "scam" in the state and the recent observation of the Calcutta High Court on it.

Kolkata, Nov 28: A major ruckus broke out in West Bengal Assembly on Monday afternoon after Speaker Biman Bandopadhyay refused to admit an adjournment motion brought by Opposition BJP legislators seeking discussions on the teachers' recruitment "scam" in the state and the recent observation of the Calcutta High Court on it.

The Speaker said that the matter is pending at the Calcutta High Court and "hence cannot come up for discussion within the House". Irked by the Speaker's decision, BJP legislators started shouting slogans and staged a walkout.

The Opposition MLAs later assembled at the lawn within the Assembly premises and staged protest.

Leader of Opposition, Suvendu Adhikari told media persons that the matter is pending at the court "cannot be just a reason for disallowing a discussion within the Assembly which is the only place for the Opposition to raise the issue..."

"The discussion could be conducted while avoiding the portions related to the court observations. If necessary, the Speaker could have expunged certain portions of the discussion from the proceeding of the House. But a total refusal to the adjournment motion was not acceptable," Adhikari asserted.

He also said that it is clear that the "decision of creating additional teachers' posts for accommodating candidates recruited illegally against some consideration was taken by the state cabinet in presence of Chief Minister, Mamata Banerjee". "We want the entire cabinet behind the bars," the BJP leader added.

On November 25, state education secretary Manish Jain informed the bench of Justice Abhijit Gangopadhyay of Calcutta High Court that a decision to create additional teachers' posts to accommodate those allegedly given appointments illegally was taken by the state cabinet on the order of state education minister Bratya Basu.

Following the submission, the court questioned how the state Cabinet could take such a decision to accommodate ineligible candidates appointed illegally.

He also said that he might have to ask the Election Commission of India (ECI) to cancel the recognition of Trinamool Congress as a political party and withdraw its logo.