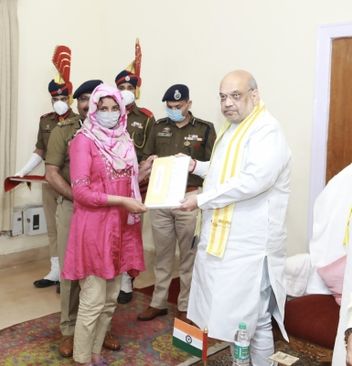 --Union Home Minister Amit Shah in Jammu on Friday handed over 'appointment orders on compassionate grounds' to the next of kin of four security personnel of Jammu and Kashmir Police who were martyred in terrorist incidents in the Union Territory.

New Delhi, Mar 19: Union Home Minister Amit Shah in Jammu on Friday handed over 'appointment orders on compassionate grounds' to the next of kin of four security personnel of Jammu and Kashmir Police who were martyred in terrorist incidents in the Union Territory.

The Home Minister, who is on a two day visit to the Union Territory, also interacted with the next of kin of the martyred security personnel. Interacting with them he said that "the entire nation is proud of the courage and commitment shown by these brave security personnel of Jammu and Kashmir Police".

The appointment orders were handed over to Pooja Devi as Panchayat Secretary in Jammu District who is wife of late Sergeant Rohit Kumar.

Kumar remained associated with counter insurgency operations from the beginning of his career and remained in the forefront in the anti-militancy grid. He was promoted out of turn on July 7, 2017 as Sergeant from the rank of Constable for his gallant action.

On January 12, a police party from Kulgam district along with the Army, on specific information about presence of terrorists in village Sehpora Pariwan, Kulgam laid siege and started search operations. While civilians were being evacuated, militants fired on the Police party, resulting in injuries to three army Jawans and Sergeant Rohit Kumar, who later succumbed to his injuries.

On August 13, 2014 after performing his duties, Shah was on way to his company headquarter Bijbehara, Anantnag alongwith others in a Police Gypsy which was attacked by terrorists at Galander Pampore, Pulwama wherein he made the supreme sacrifice for the nation leaving behind his aged parents, wife, minor son and daughter.

Similarly, Aabid Bashir is appointed as follower in Jammu and Kashmir Police. He is the son of Late Constable Bashir Ahmad Sheik. Sheik was appointed as Constable in J&K Executive Police in July 1991 and remained posted in District Srinagar till his death. During the intervening night of 29/30 of January 2000, terrorists attacked a Police party at Rabitar Bridge, Ganderbal in which Constable Bashir Ahmad Sheik laid down his life leaving behind his wife, minor son and daughter.

The last appointee is Mohsin Mushtaq as Follower in Jammu and Kashmir Police who is also son of late Follower Mushtaq Ahmad. Ahmad had joined J&K Police in May 1990 and Awas martyred during a crossfire between police and terrorists on May 9, 1993. The deceased left behind his aged parents and a son, who was only four months at that time.