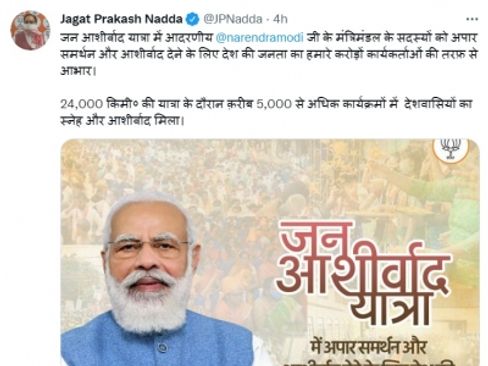 Nadda also claimed that the opposition parties "unsuccessfully" tried to disturb and create "hindrances" in the yatra and programmes.

"All ploys and disturbances have failed to shake the strong support and trust that the people have showered on the Modi government," the BJP chief said in a statement.

"We have seen how the opposition parties' coalition government in Maharashtra tried to target Union Minister Narayan Rane. It is a direct attack on our democratic system. The people's support forced all narrow minded opposition parties and our political adversaries to retreat," he elaborated.

Thanking people for "their support", Nadda said that they (people) have stood strongly with the politics of development and growth under the BJP government led by Prime Minister Narendra Modi.

He shared that the yatras, which began on the Independence Day and lasted till August 28, covered more than 24,000 kms in 14 days, wherein over 5,000 programmes were organised.

"All these programmes were highly successful, which also ensured enthusiastic participation of people from all walks of life. Entire credit of the success of the Jan Ashirwad Yatra goes to the people of India," Nadda asserted.

The BJP chief claimed that the yatras by the 39 newly appointed Union Ministers have been appreciated widely across the country and the people across the states have "heartily welcomed" the new ministers.

"People lauded the BJP government led by Prime Minister Modi for doing the all-round development and progress of India," he said.

"The Modi government has announced several pro-people and pro-poor policies and programmes that have touched the lives of all sections of our society today."

"It has taken several initiatives to boost India's security and safety and take our country on the path of prosperity and growth," Nadda added.

He further mentioned that the "tremendous success" of the yatras are also proof of the 'Vikas Yatra' that the country has seen under the dynamic and decisive leadership of the Prime Minister.

"I congratulate and thank our Prime Minister Modi for working so devotedly, tirelessly and with full dedication for our country," the BJP president said.
(IANS)