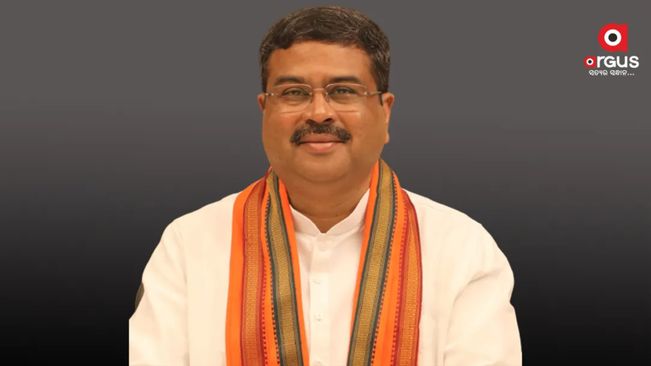 Jaipur, Nov 28: Union Minister Dharmendra Pradhan on Monday took a jibe at the Congress over the ongoing tussle between Rajasthan Chief Minister Ashok Gehlot and his former deputy Sachin Pilot, saying there is 'no government' in the state.

Addressing the 68th national event of the Akhil Bharatiya Vidyarthi Parishad (ABVP) in Jaipur on Monday, the Union Education and Skill Development Minister said, "There is no government in Rajasthan as the leaders are busy fighting among themselves." "The infighting in the party is at its peak and public welfare is nowhere on their agenda. The party is disrespecting the people's mandate. I don't have any doubt that Congress will be voted out in the next elections," Pradhan added.

On Gehlot's allegations that the BJP was trying to topple his government, he said, "Is Sachin pilot a BJP member? I respect Gehlotji but he cannot hide the infighting in the Congress. I am remined of a popular saying in this context -- 'naach na jane aangan tedha' (those who can't dance, blame the dancefloor)."

On his party's chief ministerial face in the next Assembly elections in Rajasthn, the Union minister said, "Our faces for the elections would be our (BJP's) lotus symbol and Prime Minister Narendra Modi."

While hailing the Centre's New Education Policy (NEP), the Union minister acknowledged that implementing it across the country 'will be a challenge'.

"Framing was easy, but implementing it is a challenge. However, under the National Education Policy, even a child an auto-rickshaw driver can dream of studying engineering. This is a new India and the whole world is looking at us. Narendra Modi is not just one person but the representation of the 130 crore people of the country," the Union minister said.

Earlier, in an interview, the Rajasthan CM had called Pilot a 'traitor', adding that he can never become chief minister.

Pilot, a former Union minister, later hit back at Gehlot saying that all Congress members should come together and make Rahul Gandhi's ongoing 'Bharat Jodo Yatra' a success, instead of resorting to name calling and levelling unfounded alegations against each other.

Gehlot, who was initially seen as the frontrunner in the race for the Congress president, withdrew from the contest after refusing to give up the chief ministership of Rajasthan.

CM Gehlot and Pilot have had several run-ins since a rebellion by the latter, with the support of his loyalist MLAs, was thwarted.

The Rajasthan CM had previously gone on record to label his former deputy as 'nikamma' and 'nakara' (useless).

In a dig at the Rajasthan CM, Pilot retorted that the Congress had suffered heavy defeats in Rajasthan when Gehlot was the party's state chief.