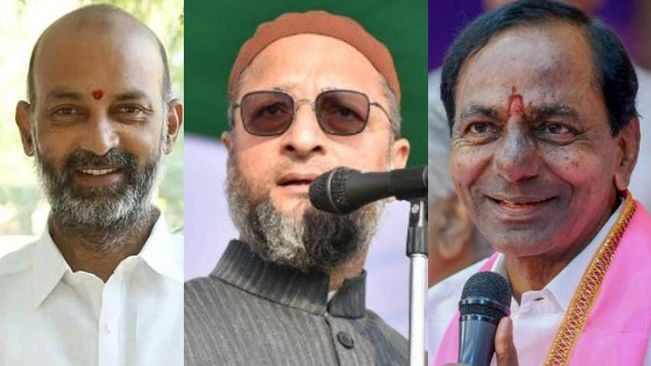 Hyderabad, Dec 7: Faced with a fractured mandate, the ruling Telangana Rashtra Samithi (TRS) of Telangana is now cautious on electing the new Mayor and Deputy Mayor of the Greater Hyderabad  Municipal Corporation (GHMC).

A TRS meeting on Sunday held on Sunday afternoon under the chairmanship of party’s working president K T Rama Rao could not take a call on the faces to be nominated to the two covetous posts.

The working president interacted with the new corporators on the election of Mayor and Deputy Mayor of the GHMC for over four hours but could not decide upon the names.

TRS won only 56 of total 150 divisions in GHMC and has 31 ex-officio votes. It requires another 11 votes to reach a simple majority:

"The party has 35 MLC: out of whom 11 are already registered as ex officio voters in the GHMC. Of the remaining 24 MLCs, 17 have been elected from Local Authority Graduate Constituencies, apart from being nominated from under the Governor's quota.

TRS leadership is said to be examining technicalities in enrolling some of the 27 MLCs as ex-officio voters in the GHMC.

According to rules, any MP, MLA, MLC or Rajya Sabha member can utilize his ex-oflicio vote only one time in any of the civic bodies. Once that member casts his or her vote, she is not eligible to vote in any other local body. Keeping this thing in view , the party leadership has decided to move carefully with regard to its strategy.

The TRS can also move forward with the support of the AIMIM, but the party is mindful of such an alliance. During the campaigning for the polls, K T Rama Rao, Municipal Administration Minister and son of Chief Minister K Chandrasekhar Rao, had refuted allegations of a “secret alliance” between the TRS and AIMIM by Home Minister Amit Shah. Rao had then said there is no “question of a tie-up” as the party was contesting all 150 wards in the polls.

In the GHMC polls the TRS emerged as the single largest party by winning 55 seats while the BJP made significant electoral inroads in Hyderabad by winning in 48 wards. On the third spot, Owaisi-led AIMIM bagged 44 seats while the Congress managed to win only 2 seats.