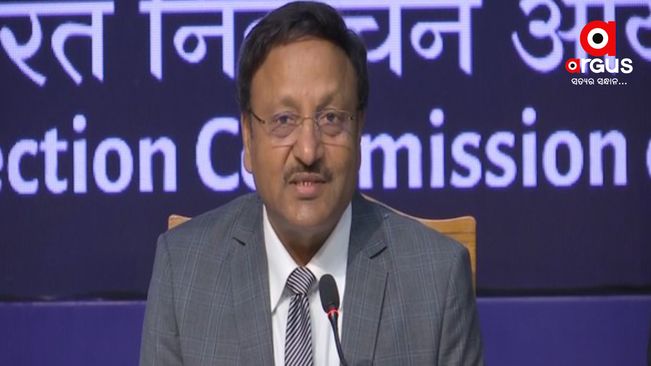 New Delhi, Jan 25: Young voters are the future of Indian democracy. The next generation, born around and after 2000 have started joining our electoral rolls, Chief Election Commissioner of India Rajiv Kumar said on the occasion of National Voters' Day (NVD).

It is, therefore critical that democratic roots are seeded at the school level before students attain voting age, said CEC. Simultaneously, youth are being engaged through various mediums in order to bring them to the polling booths. So is the case with urban voters, who tend to display voting apathy, added CEC.

He further stated that the ECI is leading the development of Assured Minimum Facilities (AMF) like toilets, electricity, drinking water, and ramps at every polling station. The Commission is keen that the facilities developed in the schools should be of permanent nature, which is a financially prudent decision as well.

January 25 marks the foundation day of the Election Commission of India, also celebrated as National Voters' Day (NVD) since 2011, he added.

The NVD epitomizes the resolve of ECI to pull all stops out to make elections inclusive, participatory, voter-friendly and ethical, he further added.

The theme for the 13th NVD (2023) is "Nothing Like Voting, Vote for Sure". As evident, the theme is such that it can capture the imagination of the voters. When citizens take pride in being a voter, as part of their civic duty, its impact on the level of governance is sure to be felt.

The institution's competency, impartiality and trustworthiness have been upheld in 17 Lok Sabha elections, 16 elections each to the office of the President and Vice President, and 399 Legislative Assembly elections to date.

The 400th assembly elections are underway. Contrary to occasional international experiences, election results in India have been never in dispute. Individual election petitions are adjudicated by relevant High Courts.

The ECI has earned the trust of political parties and citizens of India. The commitment is to enhance and deepen it.