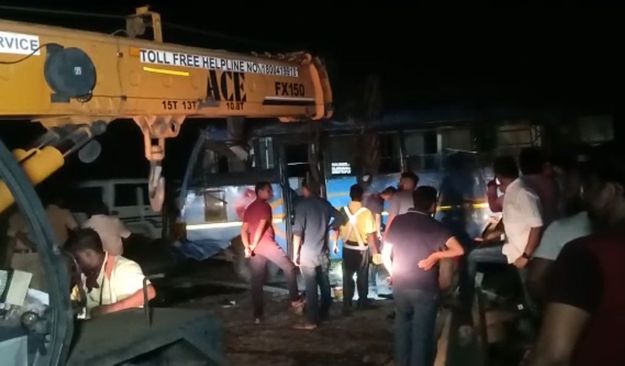 The mishap occurred on Biju Expressway near Rambahal village under Rajgangpur block in Sundarharh district.

A pedestrian and a woman passenger in the bus reportedly died on the spot.

Sundargarh, Sept 25: At least two persons were killed and 15 others sustained injuries in a road accident after the bus in which they were travelling in hit a pedestrian and overturned on Biju Expressway in Odisha’s Sundargarh district on Friday night.

The mishap occurred near Rambahal village under Rajgangpur block in the district.

As per reports, a group of devotees of Muslim community from Rourkela had visited the Dargah of Lal Shah Baba in Rajgangpur in a bus to celebrate Urs festival. While retuning, the bus driver lost control over the wheels and hit a pedestrian, and then overturned near Rambahal village at around 10.30 pm.

The pedestrian and a woman passenger in the bus reportedly died on the spot.

On being informed, Rajgangpur Police reached the spot and rescued the injured persons with the help of locals.

The injured were rushed to a Government Hospital in Rajgangpur for their treatment.

Meanwhile, Rajgangpur Police registered a case and started an investigation into the matter.