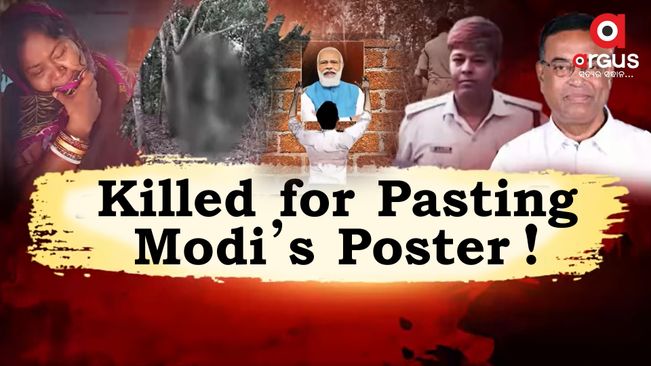 * The deceased worked in New Delhi and had returned home for the panchayat elections.

Bhubaneswar: He was killed because he was a BJP supporter and was sticking posters of PM Narendra Modi on the walls, allege family members of a deceased of Raja Jankia in Ranpur area of Nayagarh district. Even after 10 days of his death, police has not made any investigation into the allegation.

The deceased is Bibekananda Ranabijuli of Raja Jankia. Eleven days back his body was found hanging from the weak branch of an acacia tree in suspicious condition. Villagers and family members of the deceased allege that for efforts are being made to suppress the case by terming it to be a suicide. Grave allegation is being made against the inspector in charge of Ranapur police station. Even the name of BJD MLA of Ranapur is being dragged into suspicion in this case.

It is alleged that Bibekakanda was murdered by violent miscreants supporting the ruling BJD. Bibekananda’s family members say, when they had reached the police station to register complaint about missing Bibekananda, they had been driven out by the IIC of Ranapur police station, Rashmiranjan Das. Even the complaint letter was torn down, alleged Bibekakanda’s mother. This raises their suspicion that there is something fishy behind Bibekananda’s death.

Bibekananda used to work in a private company in New Delhi. He had returned to his village for the panchayat polls. He was a staunch BJP supporter. To show up his love for the BJP he was seen to be pasting posters of PM Modi on walls of his village. It is alleged that due to it he had faced the wrath of some elements of the mining mafia close to the ruling BJD. It is alleged that he and his family members had faced threats from some local BJD leaders are alleged to have threatened him and his family members.

Bibekakanda’s body was recovered from a cashew orchard, which is well known as a den of BJD activists and supporters. Family members say, Bibekananda was murdered as they had seen injury marks on the body. So, mystery and suspicions loom large over this death. Even after ten days police investigation has failed to provide any conclusive result. This raises suspicion on the intention of the investigating police personnel and possible role of elements of BJD leaders including the Ranapur MLA in the case.