BJP, BJD stage protests over violence against women in Bhubaeswar 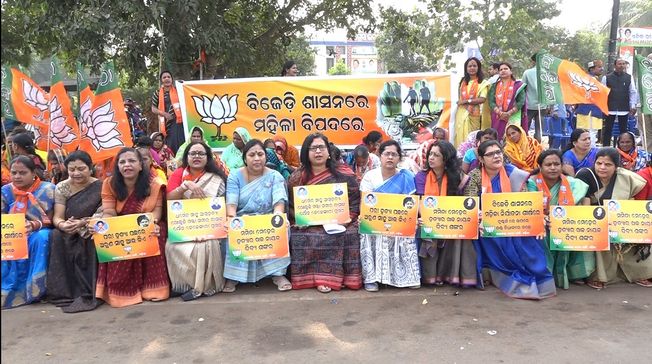 BJD and BJP on Saturday engaged in staging protests and hurling accusations at each other over violence against women in the State.

Bhubaneswar, Dec 3: BJD and BJP on Saturday engaged in staging protests and hurling accusations at each other over violence against women in the State.

While the BJD accused BJP leaders  of giving derogatory remarks against its Padampur candidate Barsha Singh Bariha, the BJP said Ministers and leaders of the ruling party are directly involved in many cases of kidnap, murder and rape of girls.

“Violence against women is on the rise in the State. Culprits are being protected by the Odisha Government as Ministers and leaders are directly involved in many cases of kidnapping, gang-rape and murder of girls,” alleged BJP general secretary Lekhasri Samantsinghar.

On the other hand, BJD Mahila leaders too staged a protest meeting at the Raj Mahal Square here in protest against alleged misbehavior shown to BJD candidate for Padampur by-poll, Barsha Singh Bariha. They burnt the effigies of MP Jual Oram and Leader of Opposition Jaya Narayan Mishra.