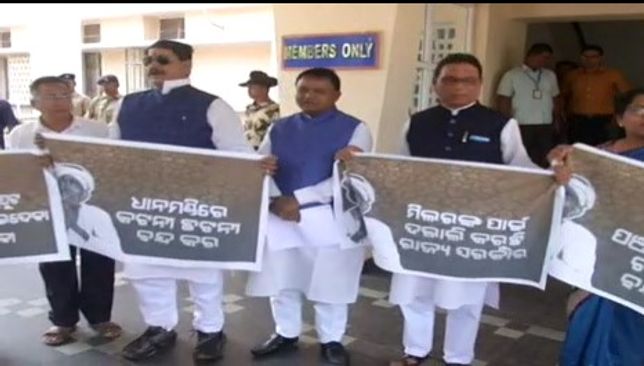 After raising voice in the House, Opposition Bharatiya Janata Party (BJP) members too staged inside the Assembly premises on Friday.

Bhubaneswar, Nov 25: After raising voice in the House, Opposition Bharatiya Janata Party (BJP) members too staged inside the Assembly premises on Friday.

The BJP members demanded that input subsidy be provided to all farmers who have lost crops due to drought in the State. The members were seen standing with posters in their hands. The posters mentioned demands and agitations like, “Stop weight cuts of paddy in Mandis”, “The State Government is doing Dalali for Millers”, “Stop illegality in registration of farmers”, “Give farmers’ list to the Centre for PM Kissan Yojana”, “We demand input subsidy be paid soon to farmers” and “Neglect to Annadata (rice provider) unacceptable” etc.

Earlier, the House was stalled during Question Hours and adjourned twice till 4 pm as BJP members raised the issue and staged a protest in the Well of the House.