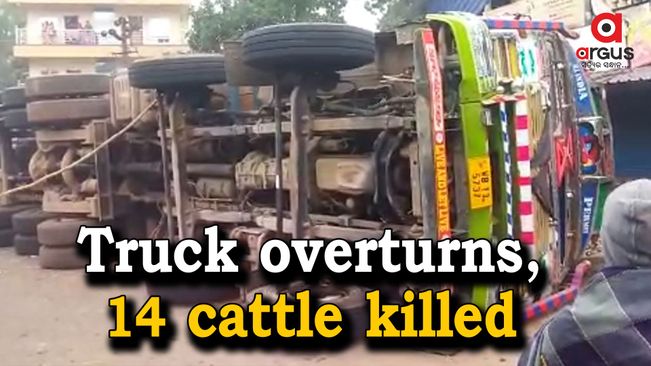 Balasore, Jan 16: At least 14 cattle were killed and several cows injured after a truck in which they were being illegally transported overturned on NH-16 in Odisha’s Balasore district in the wee hours of Monday.

The truck was reportedly carrying as many as 60 cattle in pathetic conditions to West Bengal.

As per reports, the mishap took place near Mahanty Chhak under Talsari marine police limits in Bhograi area of the district at around 3 am when the driver of the truck allegedly lost control of the wheels due to reduced vision because of fog.

The accident blocked the road and caused a traffic jam on the NH, following which hundreds of vehicles were stranded on both side of the road.

Meanwhile, Police detained the truck’s driver and helper; seized the vehicle; and started an investigation into the incident.

Local residents alleged that illegal transportation of cattle is a flourishing business in the State and the local police are often bribed to get the cattle through.