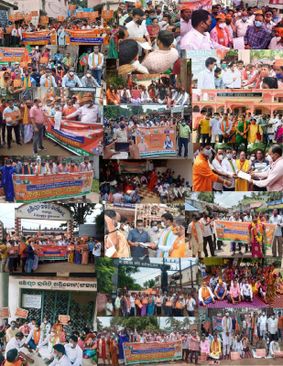 Bhubaneswar, Jul 30: The BJP on Friday staged protests against the alleged negligence by the Bhubaneswar Municipal Corporation (BMC) and Health and Family Welfare Department in containing the spread of dengue in the capital city.

“Dengue cases have risen alarmingly in the capital city as the BMC and the Health and Family Welfare Department didn’t take any action to kill larva and mosquito eggs at an appropriate time,” alleged BJP leaders.

They too alleged that anti-mosquito smokes have not been blown in the city even as half of the rainy season has passed. They termed rise in dengue cases as Odisha Government-made.

Besides, the activists created awareness among people about measures against the spread of the mosquito-borne disease.

The protests were staged under the leadership of BJP Bhubaneswar district president Babu Singh.