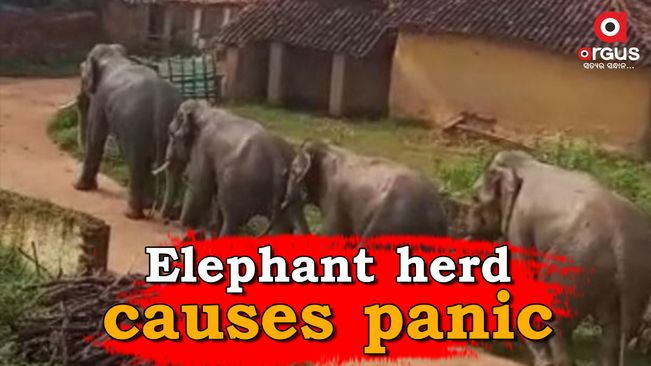 A herd of four elephants strayed into human habitations in Hatigaon village under Raighara block in the district from Salevata forest of Chhattisgarh last night.

Nabarangpur, Sep 29: A herd of elephants wreaked havoc in a village in Odisha’s Nabarangpur district on Tuesday night, triggering panic among locals.

As per reports, a herd of four elephants strayed into human habitations in Hatigaon village under Raighara block in the district from Salevata forest of Chhattisgarh last night.

The elephants destroyed some houses in the village and damaged standing maize crops spread across several acres of land around the village.

The herd reportedly returned to the jungle on Wednesday morning.

On being informed, a team of Forest officials, led by Raighar Ranger Sukumar Dukhu reached Hatigaon this morning. Tracing the footprints of the elephants, the officials said that the herd had gone towards Chhattisgarh border.

This is for the first time that the elephants have entered to the bordering village, locals said.