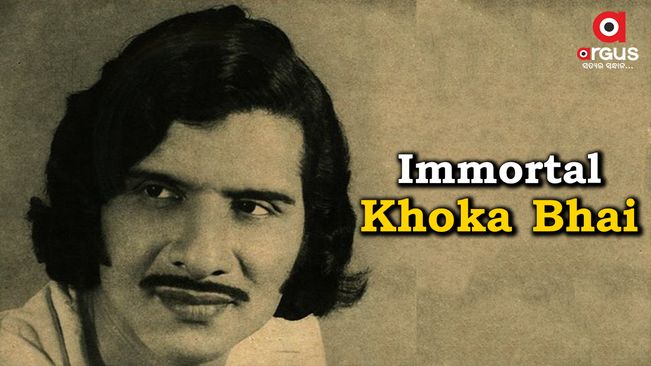 * His own unique home-bred Odia style was the speciality of his music.

* He had never undergone any professional training in music.

Music is immortal, so is Akshay Mohanty, our Khoka Bhai. His physical existence is no more with us. But this legend of Odia music will continue to add life to moods of music lovers for times to come.

He was a master of his art. Music was his passion. He had never undergone any professional training in music. Music throbbed in his every heartbeat. Akshay had excelled in every sphere of music. He was a singer, lyricist, music composer and director, all rolled into one. Added to it through a series of books, he was also well known in the Odia literary world.

Although he was born at Mundei village of Kendrapara, he had preferred to Cuttack his home. After Bachelor’s degree he had taken up law education. But he had preferred to dedicate his life to music. And through music he became a legend in his lifetime.

Way back in 1948, as a child artist he had his first song recorded at AIR Cuttack. In 1955 he became a recognised singer of this radio station. Since then he never looked back. He marched on to rule over the hearts of Odia music lovers.

His first song as a playback singer was ‘Gori Gori Gori’ of Odia film ‘Maa’ (1959). He has lent his voice to around 129 Odia movies. He was the music director of 75 movies. He wrote songs of 92 films.

Odia to the core:

His own unique home-bred Odia style was reflected in his music. It bore unique playfulness and natural truthfulness. He is considered father of modern Odia music. His iconic peppy tracks like Kabata Khol Priye, Rail Gadi etc. still make us sway to their lyrical rhythms. When it comes to his melancholic love songs like Smruti Tume, Hrudayara Ei Sunyataru etc. our hearts long to hear them repeatedly.

His compositions were never influenced by music directors of Bollywood. ‘Jajabara Mana Mora’ composed by him proves his musical brilliance and orinality. The song was about the ups and downs of human life and mind. The musical notes were fast, constantly racing between the high and the low as though depicting the struggle of the heart and the mind.

His popular songs were rooted to Odisha.  “Jaare Bhasi Bhasi ja, Nauka moro Bhasija” reflected the Odia feelings for the Mahanadi river. Several songs like this were written in colloquial Odia and spoke of the minds of commoners. In the above song a boatman travels via the Mahanadi river to tease young women of different districts.

Even among the new generation, Khoka Bhai stills remains an integral part of every listener. Today on the day of his death anniversary, Argus News pays homage to this immortal musical soul.