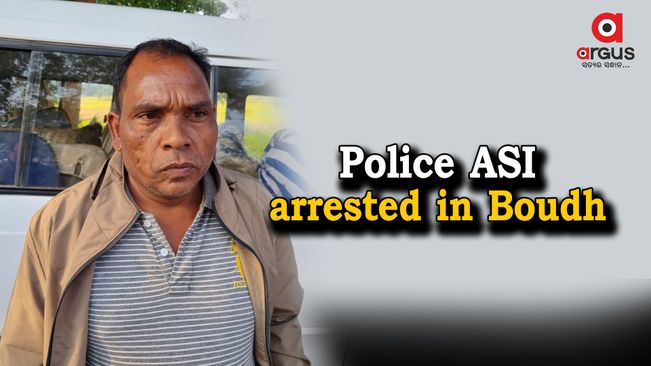 Boudh, Nov 25: Vigilance sleuths on Friday arrested an Assistant Sub-Inspector (ASI) of Police in Odisha’s Boudh district on charges of demanding and accepting bribe of Rs 15,000 from a complainant.

The accused cop has been identified as Madan Mohan Pradhan. He is currently posted as an ASI of Police at Janhapanka Police Out Post under Boudh Police station limits in the district.

According to sources, ASI Pradhan  was apprehended by Odisha Vigilance  while  demanding and accepting bribe  of Rs 15,000 from a person (on whose complaint a case  was registered in Boudh PS)  in order to attach strong sections of law to strengthen the evidence of the case, of which he was the Investigating Officer.

The entire bribe money was recovered from the possession of accused ASI in the presence of witness.

Following the trap, simultaneous searches have been conducted at two locations associated with Pradhan on charges of amassing disproportionate assets to his known source of income.

In this connection, Berhampur Vigilance registered a case against the accused ASI under section 7 of Prevention of Corruption (Amendment) Act 2018. Further investigation is in progress against accused Pradhan, a senior Excise official said. Hyderabad, Dec 3: A class 10 girl was allegedly gang-raped and murdered in Tirumalagiri village in Telangana's Mahabubnagar district, post which villagers staged a violent protest on Saturday. The 16-year-old girl, who was alone in her house on Friday night, was found hanging on Saturday morning. Her
Read full story