People of Balasore have faith in BJP: Dharmendra Pradhan during by-poll rally 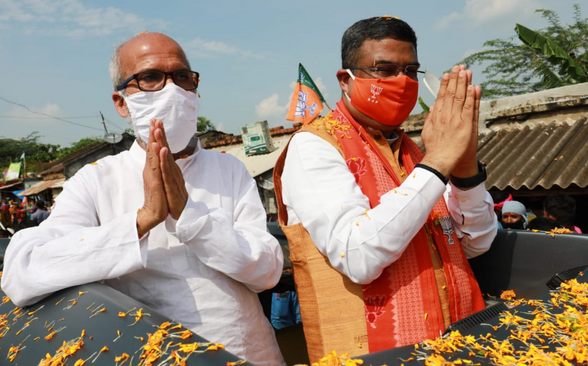 Union Minister Dharmendra Pradhan today took a dig at the BJD government in Odisha while campaigning for BJP candidate for Balasore Sadar Assembly by-poll Manas Dutta and claimed that the State Government is apathetic towards the development of the district.

Pradhan who carried out the campaign at three places including Rupsa, Sartha and Puruna Balasore said that PM Narendr Modi shares a deep relationship with the people of Balasore and he himself is committed to develop the district into a trade hub.

Supplementing his claim that the Centre is doing enough for Balasore, the Union Minister informed that 64,610 tonnes of PDS rice has been provided to 18.46 lakh beneficiaries of PM Garib Kalyan Yojana in Balasore. Similarly, 3,444 tonne pulses to 4.92 lakh families have been provided.

While addressing at the Sartha rally Pradhan said, youth are vital part of the society and their development is his priority. If BJP comes to power steps will be taken to create employment opportunity for local youths.

Notably, during a virtual rally for Tirtol by-poll yesterday, the Union Minister had heavily criticized the BJD Government by alleging that it has failed to fulfil its poll promises.