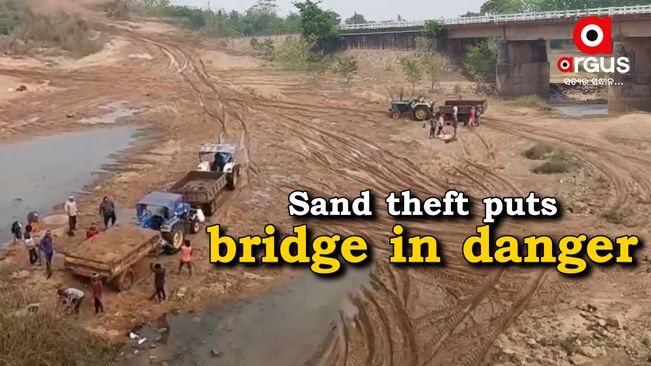 A bridge over Sona River in Balasore district’s Nilgiri area is in danger now as mafias have dug out sand from base of its pillars.

Balasore, Nov 25: A bridge over Sona River in Balasore district’s Nilgiri area is in danger now as mafias have dug out sand from base of its pillars.

According to report, sand is being illegally mined from Sona River every day.

Kathapal Bridge Over Sona River is in a precarious condition. Any untoward incident may happen any time as sand has been dug out from base of its pillars by sand mafia, alleged villagers.

They alleged that even though tractor loads of sand is being stolen away from the river day through night, the local revenue and police personnel have always remained mute spectators to the illegal act.

Sand worth lakhs of rupees are being stolen away by mafia every day. The mafias are under the protection of local leaders, they alleged further.

They even told the media that they are being threatened for life whenever they raise voice against the illegal act. They have urged the district administration to stop sand theft and protest the Kathapal bridge.